Spain Prime Minister Forced to Quit in No Confidence Vote 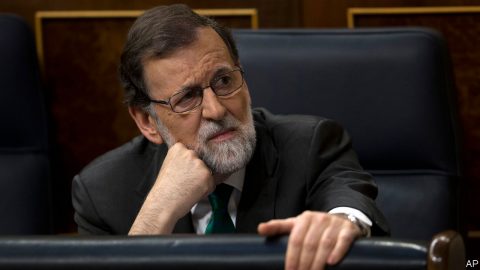 (AFRICAN EXAMINER) – The Spanish Prime Minister Mariano Rajoy has been forced out of office by a no-confidence vote in parliament.

Socialist Leader Pedro Sánchez, who filed the motion after Mr Rajoy’s party was implicated in an alleged corruption scandal, will now become the new PM.

“We’re going to sign a new page in the history of democracy in our country,” Mr Sánchez boasted ahead of Friday’s vote.

The sacked PM was the first in modern Spanish history to be defeated in a no-confidence motion.

The leader of the conservative Popular Party (PP) has been Prime minister since 2011.

During the second day of debate Friday, Mr. Rajoy admitted facing defeat and told MPs that it has been “an honour to leave a better Spain than I found”.

Mr Sánchez secured a majority in the vote after gaining support from various smaller parties, including the Basque Nationalist Party – 180 MPs backed the motion, 169 voted against, with one abstention.

Mariano Rajoy walked out of Congress and out of a job this afternoon. With a fixed smile, he hugged his staff who cheered and lined the way to the last ride in his parliamentary car.

Cheers turned to boos outside the parliament’s gates, with hundreds of protesters screaming “Good riddance”, and placards which read “PP – Corrupting Spain since 1990”.

The party was explicitly linked to what the judge called “institutionalized corruption” and questioned the court testimony of the now-former PM.