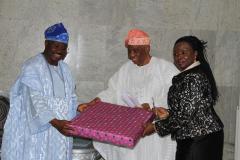 The Oyo State Governor, Senator Abiola Ajimobi, has called on universities in Nigeria to stop the indiscriminate award of honourary doctorate degrees by some universities in the country to undeserving members of the society.

Oyo State Governor, Senator Abiola Ajimobi (left) receiving a gift from the Chancellor of Lead City University, Ibadan, Prof. Gabriel Ogunmola (centre) when he (Ogunmola) led members of the management team of the institution on a courtesy visit to him in his office in Ibadan on Friday. With them is the institution’s Registrar, Dr. (Mrs.) Oyebola Ayeni (right).

Sen. Ajimobi disclosed this while receiving members of the management team of Lead City University, Ibadan who were on a courtesy visit to him in his office in Ibadan on Friday.

He said that the proliferation of honourary degrees among undeserving members of the public had reduced the respect associated to such degrees.

The Governor, however, commended the authorities of Lead City University for their contributions to human capital development in the country.

He also charged the authorities of the institution to support the urban renewal policy of the state government by redeveloping and improving the structure of the entrance to the university located in Ibadan.

In his remark, the Chancellor of the university, Professor Gabriel Ogunmola, commended Governor Ajimobi, for his urban renewal policy, which he said, had changed the face of the state.

In the same vein, Governor Abiola Ajimobi, has expressed the readiness of his administration to partner with the Subsidy Reinvestment and Empowerment Programme (SURE-P) to bring an end to poverty and unemployment in the state.

The governor, who stated this while receiving members of the state implementation committee on SURE-P led by its Chairman, Mr. Dare Adeleke in his office, described the programme as a positive step towards helping the youth and women out of poverty.

Mr Dare Adeleke had earlier said that the recruitment exercise of SURE-P had commenced in all the 33 local government areas of the state, adding that a total of 3,500 people are currently benefitting from the programme.