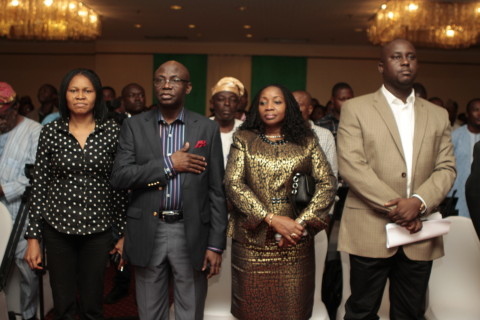 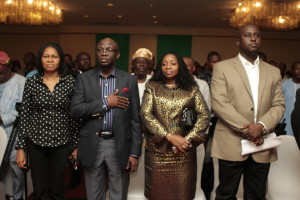 They spoke at the Maiden Edition of the Centre for Change lecture at the Sheraton Hotels and Towers, Ikeja, Lagos, Nigeria on Tuesday.

The theme of the lecture was “Nigeria at 53: Retrieving the Soul of a Country in Ruins.”

According to Sagay, the national conference was extremely necessary and would help change things in the country.

Sagay stated that was needed was for the conference to hold and evolved a constitution that would only be adopted through a referendum.

He stated that he would not mind if the 2015 elections were sacrificed for a true national conference that would salvage the nation from its numerous problems, while calling for the establishment of a state based federalism rather than the states depending on the federal government for allocation on monthly basis.

President, Centre for Change, Dr. Joe Okei-Odumakin said the body was founded believing that it would ushered in the necessary change the country needed to progress.

“Our aim is to organize for change, we believe Nigeria must work in this our time. A new Nigeria is possible especially at this time a national conference is coming.

“There should be ‘no-go area’ in this conference. The decision of the conference must not be tinkered with unless through a referendum. If they tinker with the decision, then the conference would have been in vain. We are determined that this country must work

“Nigeria lies critically ill at the intensive care unit almost without solution. We must agree at this point that this country will be healed again,” she stated.

The guest lecturer, Prof. Adesanmi said the nation would only move forward if the youths were brought into the fore in trying to salvage the nation from its present quagmire.

According to him, the youths from the age of 30 and below formed the fulcrum for change in any society, urging that the youths must be mobilized for this change.

Speaking, Bakare said holding the national conference was necessary as it would it would help to solve the problems of the nation.

“That is why we must seize every given opportunity to reason together and sincerely talk.  Above all, we must walk the talk. Not to do so may be suicidal for our nation. God forbid! That is why we are here and how to do that is what the Centre for Change and Community Development wants to lay bare,” he stated.