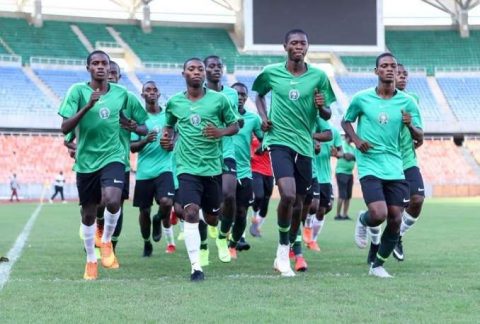 (AFRICAN EXAMINER) – The Golden Eaglets of Nigeria Wednesday defeated their Angolan counterpart 1-0 to qualify for the semi-finals in the ongoing U-17 AFCON tournament in Dar es Salaam, Tanzania.

Similarly, Nigeria has also qualified for the FIFA U-17 World Cup slated for Brazil later in the year.

The Manu Garba-tutored Eaglets had earlier beaten the host – Tanzania 5-4 in a thrilling encounter in the Group A opener.

In the pulsating game against their opponent, Nigeria’s Olakunle Olusegun scored with a well taken penalty in the 21st minute, sending the Angolan Keeper Geovani Carvalho the wrong way.

The Nigerian boys continued to heap pressure on the Angolan defence but were wasteful in front of goal with five attempts on goal out of the seven shots fired.

In the second half, Angola’s drive to level up was dealt a blow after defender Cabingano saw red card for a second bookable offence, his dangerous lunge on Olusegun earned him a second yellow card.

With a man advantage the Eaglets grew in confidence but could not convert their chances as the Nigerian side ran away with a slim 1-0 win.