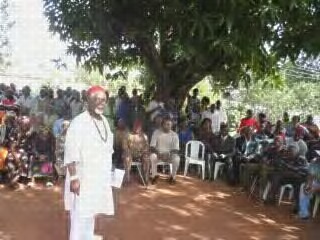 Members of Oko community, in Orumba North council area of Anambra state, and home town of the first Republic Vice President, Dr. Alex Ekwueme are now at war with each other, just as the Traditional ruler of the area, Igwe professor Las Ekwueme, Wednesday announced the suspension of 13 of its indigenes who were accused of sabotaging the community’s common interest. 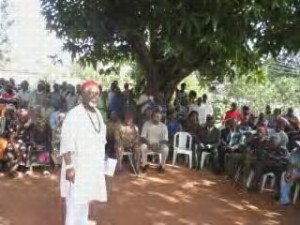 The thirteen suspended persons were accused of working against the effort of the community in ensuring that the tenure of the incumbent Rector of the federal Polytechnic, Oko, Professor Godwin Onu, is not renewed, so as to make way for an Oko person to emerge the institution’s boss.

African Examiner gathered that since inception of the Polytechnic, which was attracted by Dr. Ekwueme many years ago, no Oko indigenes has become the Rector.

Angered by the alleged sabotage of the 13 people, the community during its meeting recently, decided to mandate their Traditional ruler, who is also younger brother to the former Vice president, Professor Las Ekwueme to sanction the affected persons whom they described as “black legs” .

Announcing their suspension Wednesday in his palace in Oko,  Ekwueme said the affected indigenes will be banned for life from participating in Oko community activities and associating with Oko people in any capacity from the ward, village and community level including the town union activities.

Igwe  Ekwueme further revealed that the affected indigenes will also be barred from attending funerals, marriages, weddings, meetings, handshake, greetings, buying and selling with other indigenes pending when they are cleared by the disciplinary committee also set up by the community.

He added  that, “any Oko indigene flouting this ban by associating or interacting with the suspended members, no matter the relationship, shall similarly be banned.”

African Examiner recalled that the Oko traditional ruler, had led other prominent sons and daughters of the community to protest, last week, the alleged re-appointment of the rector of the Federal Polytechnic, Oko, Prof. Onu.

The community had insisted that Prof. Onu must not return as the rector of the polytechnic after serving his first tenure.

Similarly, the youth wing of the Oko peoples union on the same day protested in front of the Igwe’s palace against the position of the community on the call for rector’s removal.

Reacting to the suspension of the 13 indigens, president General of Oko people’s union, Mr. Ike Nwammuo also alleged that the suspended members aligned themselves with enemies of Oko people to malign the town while some youth leaders conduct themselves in manners that ridicule the authority and integrity of the OPU.

His word: “All we are saying is that Prof. Onu should leave. His four years tenure has expired and these our members will remain suspended pending when they finish their interrogation with the panel” he stated.

However, a mild drama played out earlier in the day as police clashed with the Oko Monarch, professor Ekwueme.

The police had condoned off the Oko civic centre, venue for the meeting.

Indigenes of the community who trooped to the meeting venue as early as 7:am were barred from entering the hall by the police, but on arrival, Igwe Ekwueme, defiled the police order and entered the hall, after which he asked his subjects to come in without any fear and the days meeting began.

The DPO, Ajali Police station, in Orumba North council area, Hassan Musa explained that the state police commissioner, Usman Gwari gave the order to them not to allow any meeting to take place in the community for security reasons.

The meeting was later held and resolutions taken at Igwe’s palace in Oko.