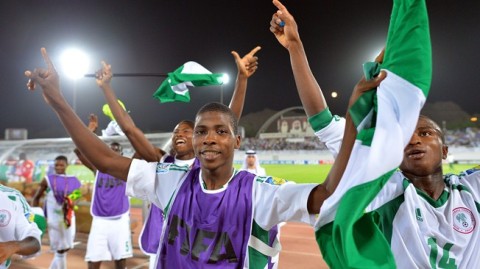 Nigeria’s Golden Eaglets showed no mercy as they dumped world champions Mexico 6-1 in an opening U17 World Cup group game on Saturday. 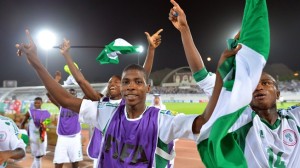 It was an emphatic victory over Mexico after the Eaglets started slowly with the defending champions all over ther place and enjoying more of the ball.

Mexico started the game on a high note, taken charge with first shot on target in the 3rd minute but saved by Alapamsu in goal but could not capitalise on that to punish Nigeria.

It was a complete one-sided game in the second half with Nigeria kids on rampage.

In 19th minute Nwakali cleared off the goal line what could have been the first goal of the game after Alapamsu fumbled an aerial ball. Chidera Ezeh fired wide from the edge of the box in the 20th minute and 22nd minute.

Iheanacho scored the opener in the 33rd minute against the run of play when he fired a left-footed shot to the roof of the net off Isaac success set him up after his shot on target was blocked by Mexico goalie.

In the 40th minute, Kelechi Iheanacho hit a brace to give Nigeria 2-0 lead after a great footwork inside the Mexico 18-yard box.

A  minute later, Jaimes capitalised on the defensive blunder to score for Mexico and take the tally to 2-1.

Iheanacho completed a hat-trick with volley from a Success flick from a throwing in the 49th minute.

Nwakali extended the Eaglets lead in the 52nd minute to 4-1 with a 25-yard shot.

In the 55th minute Zarradden Bello’s attempt at goal was saved for a corner kick by Mexico goalkeeper.

Luiz Hernandez hit bar in the 59th minute and Alapamsu made a save from shot off rebound.

Isaac scored in 60th minute, before Iheanacho scored his fourth goal of the night in the 70th minute to make it 6-1 with another left-footed strike.