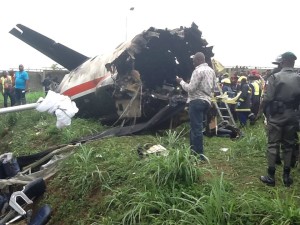 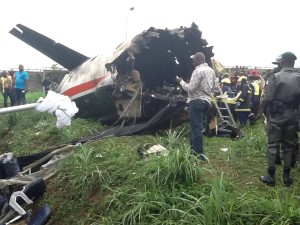 Death toll in today’s plane crash in Lagos, Nigeria has risen to 15 as five people, including the son of the former Governor of Ondo State, Feyi Agagu survive the crash.

Commissioner for Culture and Tourism, Ondo State, Deji Falae, who is the son of politician, Olu Falae was among the 15 people who died in the crash.

The Federal Airports Authority of Nigeria, FAAN, said in a statement said that five persons survived the crash.

It has also been confirmed that the wife of Agagu was not in the plane as being speculated, while the casket bearing the body of Dr. Olusegun Agagu was said to be intact and has been taken to the Airforce Base.

Authorities said the black box of the crashed plane has been found and some survivors were already being treated at the hospital.

“We call on the public to shun unconfirmed reports by avoiding speculation that could mar investigations into the crash,” FAAN said.

The Accident Investigation Bureau also said the two black boxes of the Associated Airlines plane, which crashed have been recovered.

The Director of Engineering, AIB, Mr. Emmanuel Dialla, said the two black boxes had been retrieved from the accident scene.

Dialla said, “AIB has succeeded in picking the two black boxes, which will give us an insight into what really happened.”

Agagu’s wife was said to be among the dignitaries waiting at the Akure Airport for the arrival of her husband casket from Lagos when the news of the tragedy was broken to them. The woman was said to be in shock.

Officials of the Ondo State Government were also at the airport waiting to receive Agagu’s casket. They were said to be in shock.

Well-wishers and others waiting for the copse to be brought to the venue of the lying-in-state were also said to have left the venue weeping over the shock news of the plane crash.