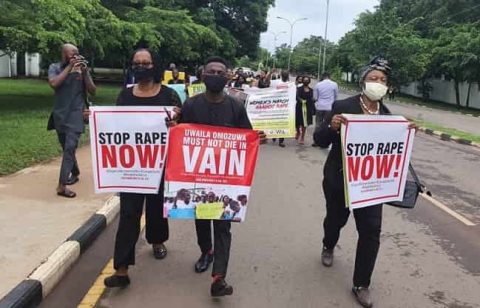 (AFRICAN EXAMINER) – As part of measure to raise awareness and garner support from members of the public and policy makers, on the rising cases of sexual violence against women in the country, scores of Gender based Civil Society Organizations (CSOs) in Enugu State, South- East Nigeria, Thursday staged a peaceful protest.

The protesters, made up of both young and aged women, who were clad in black clothes, had marched from the Enugu state House of Assembly complex where they went to register their displeasure over the barbaric act, to the state Government House.

African Examiner correspondent who covered the protest, reports that the women groups led by the Executive Director of an Enugu based human Rights and non-governmental organization, (NGO) Women Aid Collective (WACOL), Professor Joy Ezeilo, were received at the government House by the state Attorney General and Commissioner for Justice, Chief Mellitus Eze, Chief of Staff to governor Ugwuanyi, Dr Festus Uzor and his Deputy Chief of Staff, Prof. Malachy Ukwueze.

Addressing newsmen during the exercise, Professor Ezeilo, who is also the Dean, faculty of Law in the Enugu campus of the university of Nigeria (UNN) said that the spate in sexual based violence especially during the current COVID-19 pandemic is worrisome as it has taken a new unacceptable dimension with women no longer feeling safe in their father land.

According to her, “We are here to register our protest against the way our young women and girls are raped across Nigeria, the spike is taking a new dimension, especially in this COVID-19 time. Ladies are being raped and abused in all sorts of manners and we say that these gender violence must stop “these impunity must stop.”

The human rights lawyer explained that ‘WACOL and partners which is made up of Civil Society Organizations in Enugu State decided to organize this protest in solidarity with women across Nigeria in a move to stamp out gender-based violence. We say that the spike in rape that we’ve seen this time is high and we need to raise accountability stake.

“We must promote zero tolerance to all forms of sexual exploitation and abuse including gender-based violence. We are worried that at a time when the pandemic is ravaging the world that we are having another epidemic or call it a pandemic upon pandemic, this has left our women and girls feeling very unsafe.

Professor Ezeilo, added: “this is a very disruptive time when people are no longer feeling safe in their homes neither are they feeling safe on the streets. Women are abused at domestic level and in public places. Incest and defilement of young girls is on the increase and the practice of blaming the very victim prevents even adult women from talking about this. Rape is a serious felony and a crime under Nigerian Law.’

She, however, hinted  that her organization handled 25 cases of rape in April and May this year, while a total of 156 cases of sexual and gender based violence were handled by the rights group all within the period of the pandemic in Enugu State alone.

The WACOL boss, therefore, called for the implementation of a commission on gender-based violence in Enugu State, which according to her will fast track the fight against gender based violence in the state.

She equally advised victims and their families to always endeavour to report cases of such barbaric act to the appropriate quarters when it happens, saying “we want justice for all the rape victims in Nigeria.

In his response, the state Attorney General and Commissioner for Justice, Chief Eze, had condemned in its entirety recent wave of violence against women in Nigeria, stressing that the governor Ifeanyi Ugwuanyi, led administration in the state, is totally against such unholy act, and is in the forefront of stamping out the ugly trend via proper legislation.

Some of the placards displayed by the women during the protest read thus: “say no to rape”, rapists are killing our women”,  “end the impunity now” expose the rapists” “end the violence against women and girls” among others.