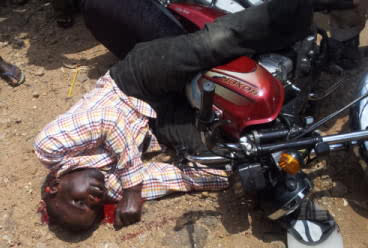 A gallant police man attached to one of the new generation banks in the commercial city of Onitsha, Anambra state, on Thursday shot dead two notorious  robbery suspects while trying to rob a woman. 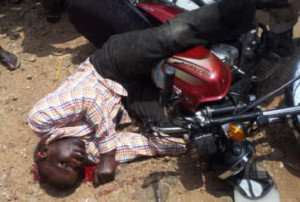 An eye witness who gave his name as Chris, told African Examiner that the two suspects met their Waterloo, while trying to rob a (woman) who came out of a new generation bank along the ever busy Nkpor Limca Road, Onitsha.

He said the robbers who operated in motorcycle popularly called  (Okada) stopped the woman in front of the bank, and while trying to snatch her purse which she refused them access, the mobile policeman on duty got alert and gave the woman sign to bend down, and immediately open fire on the hoodlums, killing them instantly.

Our correspondent learnt that the two man notorious gang have been terrorizing  bank customers within the area.

However, the victim, who had only N500 on her when the robbers attacked her, said  she was  amazed

Emeka Chukwuemeka, the Anambra state. Police public Relations officer, PPRO, who confirmed the killing when contacted, disclosed that a locally made pistol, motor bike used in the operation and some ammunition were recovered from the suspected criminals.