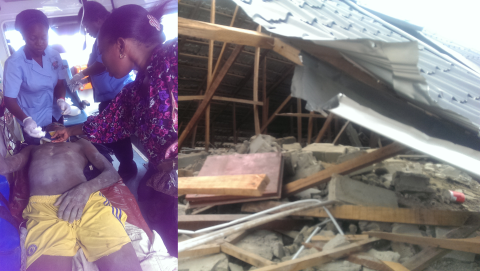 A two-storey building under construction collapsed on Thursday at Oworonshoki area of Lagos, Nigeria with 10 people escaping death. 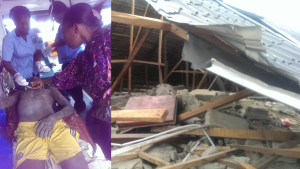 Emergency rescue responders saved the day as they work frantically to pull out alive 10 people trapped in the debris after the building caved in at about 11.00 am at 11 Sand Beach Lane, Oworonshoki.

The National Emergency Management Agency (NEMA) says four minors were among those rescued from the collapsed building and gave their names as Monday Ahungbe, 12; Jimoh Adebi, 13 and Moses Atoketi, 15 years.

NEMA Spokesperson, Mr. Ibrahim Farinloye said those pulled out of the building were injured nd had to be rushed to the hospital for medical attention.

“Some teenagers sustained minor injuries and were being attended to at the Folabi Medical Centre while two adults had been taken to Gbagada General Hospital for medical attention,’ he said, adding that the rescue operation was prompt.