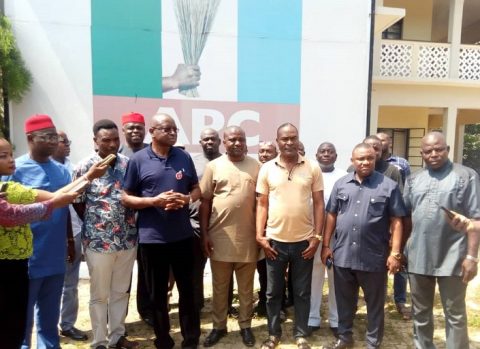 Eze, a former Senate committee Chairman on works, and two term Senator, who made this public at his campaign office, Saturday equally  announced a former member of the Federal House of Representatives,  Barrister KGB Oguakwa as the Director General of his campaign organisation.

He said  that the ruling  APC was determined to connect  Enugu state back to the main stream of Nigeria’s polity at central level, noting that the Igbo race had complained  so much of marginalization over the years, a development he said, was occasioned  by the fact that the people were not in the political table where things were distributed.

According to the governorship hopeful, “We just have to underscore our readiness and our preparedness to connect our people to the centre because the message we have is that our people have been disconnected from the centre for a while and we need to take them back to the centre so that they can get their due.

“You know our people cry about marginalization of one thing or the other, it is because they don’t have their own people sitting in the sanctuary where decisions are being taken and we are going to connect our people there and there’s no better place to start than Enugu which is the capital of the south Eastern Nigeria and is the capital of the old east.

Eze added: “Once you have APC in Enugu you can be assured that APC has become a truly national political party because then, it has been planted in all parts of Nigeria and we have the determination.

He further declared that “We have the support of our people and we have the resources to do it and we assure Nigerians and Enugu people that the business we are going to do in Enugu will be different because we will do work on behalf of the people.

Our Correspondent reports that the APC Gubernatorial candidate, who represented Enugu North senatorial district while in the national Assembly NASS, was accompanied by the state chairman of the party, Dr. Ben Nwoye, South- East  National Vice chairman, Chief Emma Enukwu, among other chieftains .