The All Progressives Congress (APC) has said there is no truth in the rumours that the party’s congress, starting nationwide today, has been postponed 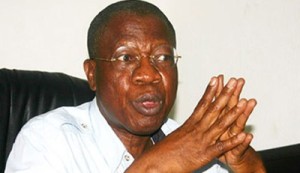 In a statement issued in London, England, on Saturday,  by its interim National Publicity Secretary. Alhaji Lai Mohammed, the party said the congress is  going on as planned nationwide.

“We urge our members to  ignore the wild rumours on the postponement of the congress, which is another attempt by the enemies of democracy to sabotage the party’s monumental progress,” it said

Meanwhile, APC has disowned one Emi Abata who is parading himself as the Chairman of the APC in Lagos State

The party said  since the process that will culminate in the election of the party’s leaders at the various levels has just begun today with the ward congress, no one can claim to have been elected a leader at any level

“In any case, the state congress is not due to be held until April 23rd, after which our elected state officials will emerge. How then can anyone claim to be the Chairman of our party in Lagos ? This is absurd and clearly orchestrated ,” APC said