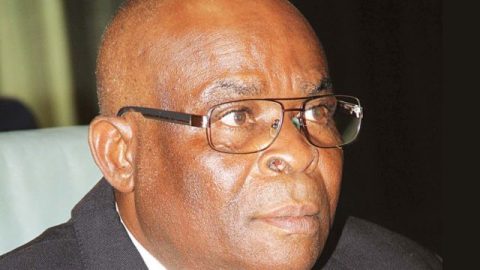 ABUJA, NIGERIA (AFRICAN EXAMINER) – The embattled Chief Justice of Nigeria (CJN), Mr. Walter Onnoghen, has commenced his defence with his driver, Mr. Lawal Busari, as the first defence witness in his ongoing trial over charges on alleged false and non-declaration of assets before the Code of Conduct Tribunal (CCT) in Abuja.

Mr. Busari, who was led by Onnoghen’s head, Counsel team, Chief Adegboyega Awomolo (SAN), described how he drove the suspended CJN to the office of the Code of Conduct Bureau, on July 28, 2010, to obtain the assets declaration form.

He disclosed that he paid the sum of N200 for Onnoghen’s assets declaration form on November 3, 2010.

While the cross examination lasted, Chief Awomolo sought to tender the receipt for admittance as an exhibit, but the prosecuting counsel, Mr. Aliyu Umar (SAN), objected.

Mr. Umar argued that the “Revenue Number” did not appear on the receipt, insisting that the “the authenticity of the receipt is in doubt”.

He countered that since Mr. Busari, was not the maker of the document, he lacked the right person to tender it.

The defence, by the testimony of the witness, sought to fault the prosecution’s charge that the suspended CJN did not declare his assets from 2005 and 2016.

The 60-year-old witness, who described himself as the Chief Driver/Mechanic at the Supreme Court, claimed that while he was with Onnoghen at the CCB office on July 28, 2010, the suspended CJN also asked him to obtain his own assets declaration form.

He said he also obtained his form. “On getting there (CCB office), he (Onnoghen), collected assets declaration form.

“After he was given the form, he claimed he was asked, ‘’Alhaji are you not going to collect your own?’’ After, Busari claimed that the suspended CJN directed him to collect his own.

“We got back to the office, I filled my own.

“On November 3, 2010, My lordship gave me N200 to pay into the treasury account for the assets declaration form.

After, the three-man CCT panel led by Justice Danladi Umar overruled the prosecution and admitted the receipt as an exhibit.

Justice Onnoghen was suspended by President Muhammadu Buhari in February, 2019 on the order of the CCT Chairman, when he (Onnoghen) initially declined to honour the court invitation.