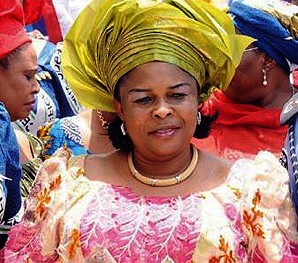 As Bayelsans prepare to elect a new governor on December 5 this year, there are indications that the wife of the former president, Dame Patience Jonathan is backing the governorship ambition of Chief Timipre Sylva, the immediate past governor of Bayelsa State. Sylva who is standing trial on multiple corruption charges wants to contest the gubernatorial election on the platform of the All Progressives Congress (APC).

In a meeting convened by Mrs. Jonathan last Monday at her palatial hotel in Otuoke, the former First Lady read the riot act to members of her group not to support the re-election of the incumbent governor, Hon Henry Seriake Dickson. She directed them to support the aspiration of Sylva. When some of the people at the meeting raised observation as to the practicality and feasibility of working for Sylva when the former president, Dr. Goodluck Jonathan had openly declared support for Dickson, Mrs. Jonathan urged the group to leave her husband to her to handle adding that nothing will make Jonathan support Dickson when the chips are down.

”My husband dey play politics with Dickson. Dickson think say na only him wise; nobi only him waka come Bayelsa. E de chop alone, ego die alone. Oga will soon dump Dickson, don’t worry. My husband was accused of not being a good politician. Now he has learnt fast to be a good politician, what you see is politics, Dickson won’t go anywhere,” Mrs. Jonathan boasted at the meeting.

The meeting was well attended by members of her group. Chief amongst those in attendance are: former acting governor of the state and chairman of the defunct Transformation Ambassadors of Nigeria (TAN) in Bayelsa State, Hon Werinipre Seibarugu, Dr.Weripamowei Dudafa, former presidential aide to the immediate past president and Commissioner for Local Government under Sylva. Others are former Commissioners for Transport and Sports, Mrs. Marie Ebikake, Hon Ebikitin Diongoli respectively, a female politician, Mrs. Remi Kuku and a host of others. They lamented the body language of the PDP apparatchik which they claimed would support Dickson to be the party’s candidate as against Dudafa who is the anointed godson of Mrs Jonathan.

Having failed to fly the Dudafa ticket, Mrs Jonathan and her group resolved to mobilize support for Sylva as an alternative but vowed to remain in the PDP, to frustrate the re-election of Dickson who is generally adjudged to have opened up the state and delivered on his campaign promise to Bayelsans. Consequently, an anti- Dickson group within the PDP known as PDP Unity Forum headed by Ebikake was founded to discredit the state government. In separate interviews with the press in Yenagoa on Tuesday, Ebikake lambasted Governor Dickson whom she describes as high-handed and declared that her group will work against the victory of Dickson and urged the party not to field him. Doingoli too spoke in the same vein.

Mrs. Jonathan’s anti-Dickson mobilization was coming few days after the national secretariat of the party dispatched a reconciliatory committee to Bayelsa to reconcile the feuding factions in the party ahead of the elections. The committee which is headed by the party’s acting BoT Chairman, Gen. Haliru Mohammed Bello was received by the governor in government house last Saturday, after which they proceeded to meet the former president, Dr. Goodluck Jonathan in his Otuoke home. The committee also met with the Mrs Jonathan group as well as those party members who had been either suspended or expelled from the PDP for anti-party activities in the last National and State House of Assemblies election in the state. Members of the Committee who were on the trip with the

At the end of the meetings, the reconciliatory committee chairman and members praised the ex-president for his fatherly role in the crisis rocking the PDP. The committee also eulogized the governor for developing the state and for leading the party to a resounding victory in the state in the last election. The committee also urged party members to bury the hatchet and work for the victory of PDP in the governorship election on December 5. While reminding the party men and women of the good the PDP has done to them as individual and as a state through the elevation of Dr. Goodluck Jonathan to be president of Nigeria, the committee members said Nigerians will be disappointed with Bayelsans if the PDP loses the guber election to the opposition. The committee subsequently lifted the sanctions on the members after they had shown remorse for their activities and they all resolved to work for the victory of PDP. But not sooner had the committee returned to Abuja than Mrs Jonathan and her loyalists ate their words and renewed their plot to back Sylva!

It will be recalled that the former First Lady had not hidden her dislike for Dickson and her desire to impose Dudafa on Bayelsa State, a wish that has polarized the state chapter of the party. Mrs Jonathan used TAN to antagonize the governor in the build-up to the general election and made it look as if Dickson was working against the re-election of Jonathan.