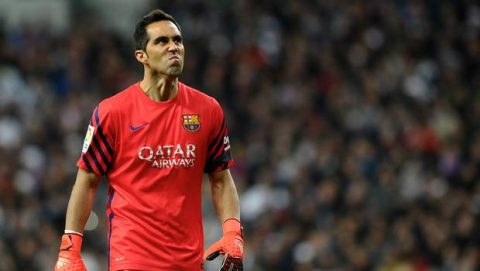 However, the Spanish club hinted that the fee for the 33-year-old Chile international could still rise to £1.7m of add-ons.

Bravo signed a four-year contract with Barcelona. He is expected to start ahead of England goalkeepers Joe Hart and Argentine Willy Caballero.

On their side, Barca have replaced their ex-keeper with Netherlands international Jasper Cillessen, who joined from Ajax.

The new Man City goalkeeper said: “I’m very proud to be joining Manchester City”.”I know the club is building something very special and I hope I can be part of many successes in the coming years”, he added.

Bravo joined Barcelona in 2014 and had won two La Liga titles as well as the FIFA Club World Cup.

He was also part of the Champions League – the 2015 winning squad, but did not play in the competition for Barca.

Bravo confessed: “It is not easy to leave a club like Barcelona where I had two fantastic years, but the opportunity to work with Pep Guardiola was too good to refuse”.