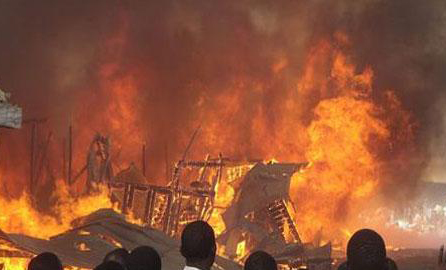 Tragedy struck at Ikotun area of Lagos, Nigeria when three Togolese siblings were killed and their father seriously burnt when fire gutted their house.

The incident, which occurred on Friday at No. 8, Odofin Close, Ikotun saw the house being razed by fire.

It was gathered that the sibling’s father, one Pele Prazo was pouring fuel into a generator when one of his daughter, with a lit candle stick came to the scene, which sparked off the fire, with the father serious burnt.

The man’s daughter, called Abla, who was with the candle stick was seriously burnts and was said to have died at the Igando General Hospital, while her sister, a three-year old girl was burnt to death when the fire occur.

The little girl was said to be inside the apartment when the tragedy occur but was not spared by the inferno, while the man’s son was also said to have died as a result of the fire, while the house was completely razed.