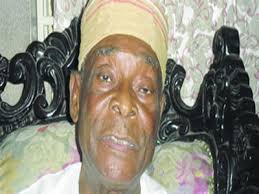 Ex-Lagos State Deputy Governor during the Lateef Jakande admistration, Chief Rafiu Jafojo has died at the age of 80 in Lagos.

The remains of Jafojo will be commited to mother earth today at his resident in Ikeja, in accordance to Islamic rite.

The former deputy governor was born on December 6, 1935. His parents were the late Pa Bakare Adeyefa Jafojo in Ebute Meta and the late Madam Taiwo (nee Adebunmi) of Ebute Meta, Lagos, but he grew up in Isale Awori, Ikeja.

Jafojo attended Alafia Institute, Ibadan and Christ High School, Ilubinrin, Lagos, where he wrote the West African School Certificate Examination and passed with flying colours. He began his working career in 1959 as a Building Inspector with the Ikeja Town Planning Authority, but left for England In 1961; his bosom friend Chief Ayo Otegbola was with him on the trip.

While in England, Chief Jafojo was a student-activist; he was a member of the West African Students Union. It was from here he honed his skills in partisan politics. Upon his return to Nigeria, unsurprisingly, he pitched tent with the Egbe Afenifere.

In 1978, when the Army prepared to return the country to political rule, Pa Jafojo joined the defunct Unity Party of Nigeria (UPN), whose founder/national leader was the late Chief Obafemi Awolowo. His ambition was to be a lawmaker. To achieve this, he collected a form to represent his Agege Constituency in the state House of Assembly. This was not to be as mother luck smiled on him; the late sage Chief Awolowo encouraged him to join the then governorship candidate Alhaji Lateef Jakande as his running mate. The joint ticket worked; they won the election.

On October I, 1979, Chief Jafojo, alongside Alhaji Jakande was sworn in as the first democratically elected Deputy Governor of Lagos. The event was historic because at 44 years, Chief Jafojo also became the first Awori to occupy the exalted number two-seat in the state.

After their very successful term, they were re-elected. The military later sacked the Jakande administration in 1983.

The Chief of Staff to the Speaker of Lagos State House of Assembly, Mr Adewale Jafojo has described the death of his father, Chief Rafiu Bakare Adeyefa Jafojo as a life well spent.

Chief Rafiu Jofojo was the first Executive Deputy Governor of Lagos State in the administration of Alhaji Lateef Kayode Jakande, between 1st October, 1979 and 31st December, 1983.

Adewale, who announced the death of his father said nobody wants to lose their parents or their loved ones even if they live more than 200 years on earth. “We regret to announce the death of our father, though he has spent a life well spent”, said Adewale.

While praising the late former Deputy Governor, he said the deceased has contributed his own part to the development of the  State and the nation as a whole.