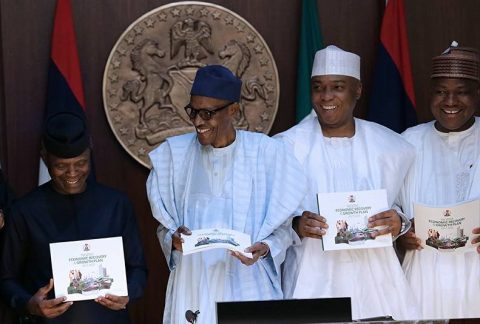 ABUJA, NIGERIA (AFRICAN EXAMINER) – President Muhammadu Buhari has appealed to the State Governments to draw inspiration and strategic direction from the new “Economic Recovery and Growth Plan” (ERGP: 2017-2020) to articulate their economic programmes, particularly in the development of the real sector.

The President made the appeal Wednesday during the official launch of the plan inside the Council Chambers of the Presidential Villa, Abuja.

While assuring that we, his administration was committed to create the enabling environment for business to thrive, the President called on all Nigerians to work with his government ”to ensure we achieve those objectives”.

Mr. President confirmed that the contents of the Plan were already familiar to a broad cross-section of Nigerians as it was developed in consultation with a wide group of stakeholders, including the National Assembly, State Governments, the business community, labour unions, academia, civil society groups and development partners.

Buhari highlighted that the Plan integrate his administration’s sectoral plans for agriculture and food security, energy and transport infrastructure, industrialization and social investments together in a single document.

In addition, the President stated that the plan was built on the Strategic Implementation Plan and set out on an ambitious roadmap to return the economy to growth; and to achieve a 7 per cent growth rate by 2020.

”Our aim simply put, is to optimise local content and empower local businesses. We seek not just to take the Nigerian economy out of recession but to place it on a path of sustained, inclusive and diversified growth.

”We are determined to change Nigeria from an import dependent country to a producing nation. We must become: A nation where we grow what we eat and consume what we produce.We must strive to have a strong Naira and productive economy” President stressed.

He commended the Federal Ministry of Budget and National Planning for successfully coordinating the Plan’s development, as well as saluted the efforts of the Economic Management Team under the leadership of the Vice President Prof Yemi Osinbajo for overseeing the drafting of the Plan.

The Plan launch which held before the weekly Federal Executive Council (FEC) meeting started was garced by top Government functionaries including: the Vice-President Yemi Osinbajo; President of the Senate, Bukola Saraki; Speaker of the House of Representatives, Yakubu Dogara.

Others in attendance were: Chairman of the Nigerian Governors Forum, Abdulaziz Yari; National Chairman of the ruling All Progressives Congress (APC), Chief John Odigie-Oyegun; Governor of the Central Bank of Nigeria (CBN), Mr. Godwin Emefiele and FEC members.