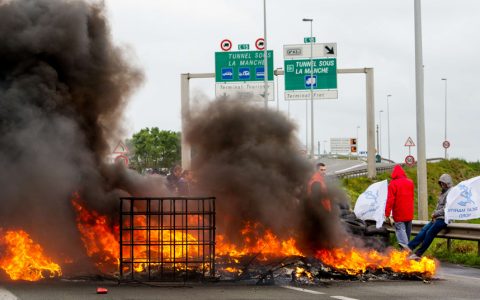 BALTIMORE, MD (AFRICAN EXAMINER) – Contrary to the claims by French officials that the place is now empty, hundreds of migrants are still reportedly left inside the “Jungle” – camp in Calais.

Worst still, aid workers confirmed that about 100 unaccompanied minors were left with nowhere to sleep overnight.

The migrants are said to be increasingly desperate. French authority indicated that almost 5,600 people have been moved to reception centres since Monday.

The figure included about 1,500 unaccompanied minors being housed in an on-site container camp, which activists say is now full.

Also, demolition crews have continued to clear the remaining tents and shelters from the area, which were damaged by fires reportedly set by departing migrants.

The prefect of Pas-de-Calais, Fabienne Buccio, said it was “mission accomplished” for the operation.
The camp has become a key symbol of Europe’s migration crisis, with its residents desperate to reach the UK.

Also commenting, Caroline Gregory of Calais Action, a British charity, stated about 100 unaccompanied children had been left in the camp overnight.

“We were begging the French authorities to actually do something about the refugee children and nothing was done” she said in an interview with BBC.

Also, volunteers found shelter for the children in a warehouse, where many of the migrants were being processed, and makeshift school inside the camp.