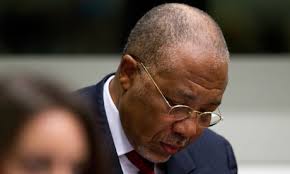 A UN-backed special court in The Hague has rejected an appeal against war crimes convictions by lawyers representing former Liberian President Charles Taylor.

It ruled that his convictions had been proved beyond doubt.

Taylor appeared impassive in court as the judge upheld his convictions and 50-year sentence.

He was sentenced in May 2012 for aiding rebels who committed atrocities in Sierra Leone during its civil war.

His lawyers had argued that there were legal errors during his trial.

Taylor, 65, was found to have supplied weapons to the Revolutionary United Front rebels in exchange for a constant flow of so-called blood diamonds…/BBC