Court Upholds Ban on Use Of Hijab At Lagos Schools 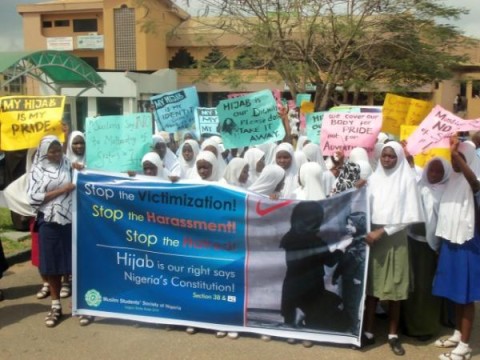 An Ikeja High Court has upturned the suit filed by the Lagos state branch of the Muslims Students Society of Nigeria (MSSN) on wearing of Hijab in the state’s public schools.

Justice Modupe Onyeabor while delivering judgment on the suit Friday, established that the outlaw of the wearing of Hijab over school uniforms within and outside the premises of public schools was in line with provisions of the law.

She cited sections 38 and 42 of the 1999 Nigerian Constitution, to counter the plaintiff – MSSN’s suit that that the ban violated the law.

Besides, the jurists also quoted Section 10 of the Constitution, which she offered considered Nigeria a secular state, hence the reason for continuous neutrality by the government.

She added that the government, had obligation to preserve the secular nature of the schools as argued by the State’s Solicitor-General, Mr. Lawal Pedro (SAN).

The jurist held that since the the public schools were run  by the government, it was expected for the authorities to direct dress codes, that would align with the constitution and other guidelines to the students.

Wearing of Hijab by some students,  the judge delivered would also disturb the required uniformity and result to inferiority complex among the students.

The suit was therefore resolved against the plaintiff. MSSN Counsel, Gani Adetola-Kazeem, reacted that his client would appeal against the verdict, saying the judgement was not satisfactory as he held there were too many unresolved issues in it.

MSSN filed the suit on May 27, 2013, praying the court to declare ban on use of Hijab by the female students illegal, on the ground that it infringed on the students rights to freedom of thought, religion and education.

It was prompted by mal-handling by a Principal of Kadara Junior Secondary in Ebute Metta of a female student, namely Aisha for wearing Hijab during school hours.