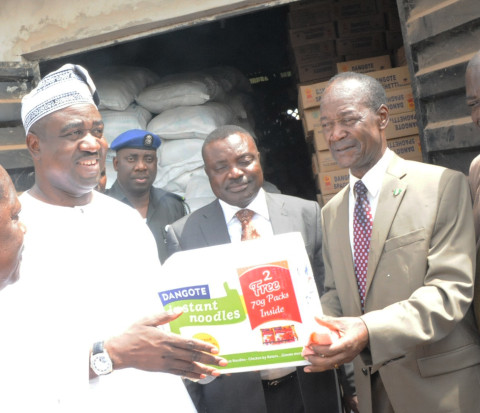 The relief material, according to the Group, is meant to support the ongoing effort of the state government to bring succor to the victims of the recent crisis that affected some parts of the state. 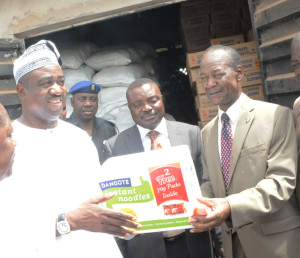 Speaking at the occasion for the formal handover of the items to the displaced persons in Makurdi, President and Chief Executive of the Dangote Group, Alhaji Aliko Dangote said: “ We have a very cordial relationship with our host communities in Benue and it is only natural we identify with them at a time like this. What has happened is unfortunate and we empathise with all the affected people”

Dangote who was represented by his Special Adviser Eng Joseph Makoju said that it was unfortunate that the crisis happened and that the insurgency was diversionary to the government effort at bringing the dividend of democracy to the people of the state.

He said: “Governor Gabriel Suswam administration has done a lot to improve the wellbeing of the good people of Benue State through massive upgrade of infrastructure, empowerment of rural farmers and funding of the educational sector. The infrastructural development in Benue state has been significant and his love for his people is unparallel.”

He said the relief material donated was part of his company’s Corporate Social Responsibility (CSR) programme in the state that covers: Health, education, women and youth empowerment and disaster relief.

He said in Gboko, the Dangote Group has over the years built blocks of classrooms, constructed water boreholes and provide electricity in communities around the Dangote Cement plant. He added that the company gives an annual scholarship grants running into millions of Naira to the people of Gboko communities.

While thanking the Dangote Group, the state Governor Gabriel Suswam who inspected the relief items said he was overwhelmed by the donation of the Dangote Group. He expressed the state appreciation and prayed that God will continue to bless Dangote Group. He lauded the CSR activities of the group and urged other corporate bodies to emulate the deeds of the organizations by giving back to the society.

“ Dangote Group’s donation today has been overwhelming. We remain grateful. The People of Benue State are happy with the oganisation’s activities and I am using this opportunity to urge other corporate bodies to also give back and make people their priorities.”

He also applauded job creation activities of the Dangote Group, describing him, as a man that his doing all within him to make his people satisfied and happy. He however assured the Management of Dangote Group of the State’s support at all time.

Speaking also at the occasion, the Executive Secretary of the State Emergency Management Agency Mr. Adikpa Agbatse said the way Dangote packaged the donation makes it easy for distribution.

He said Dangote Group has demonstrated that it is a Nigerian company that is always interested in the welfare of all the people irrespective of tribe and religion.

He expressed his appreciation and assured the Dangote team that the items will et to all the internally displaced persons.