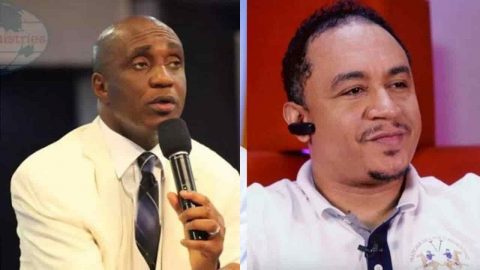 (AFRICAN EXAMINER) – Popular Nigerian media personality, Daddy Freeze, has finally reacted to the statement made by Pastor David Ibiyeomie as he called on security authorities to take note as his life was threatened.

African Examiner had reported that Pastor Ibiyeomie had used derogatory words on the broadcaster for his constant attack on Bishop David Oyedepo, who the pastor refers to as his father.

Daddy Freeze in a video on his YouTube channel on Tuesday stated that he was “devastated” by the pastor’s video because of the “content” and he accused Pastor Ibiyeomie of racism, discrimination, and threat to life.

Also, he disclosed that he never insulted Pastor Oyedepo but only brought out his attention to an issue.

The broadcaster also stated that the term “half-caste” is “racist” enjoining the cleric to issue an apology to victims of racism.

He added: “Devastating that just to get to me, Pastor Ibiyeomie will drag the whole Somalia nation. I’m very proud to associate myself with Somalians because they’re a beautiful people. It is hate speech to undermine them with derogatory words, like there’s anything wrong with the Somalians.”