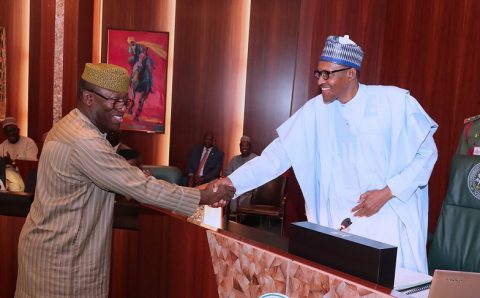 In his valedictory speech, President Buhari Wednesday ahead of the weekly Federal Executive Council (FEC) meeting led other members, to bid Dr. Fayemi farewell at a brief event held inside the Council Chambers of the Presidential Villa, Abuja.

The FEC’s members who spoke at the ceremony attested to the fact that Fayemi had what it takes to contest, win poll as well as rescue his South West State.

Buhari said Fayemi’s contributions in his Ministry helped the present administration to achieve progress, especially in the solid minerals sector.

The President used the event to call on Nigerians who have attained due age to collect Permanent Voters Card PVC so as to elect candidates of their choice at all levels during incoming elections.

The former Minister, also former Ekiti State Governor thanked Mr. President and his colleagues for the honour bestowed on him.

However, his campaign suffered a setback last weekend as a former House member Hon Opeyemi Bamidele and a Chieftain of APC and about two others were hit by a policeman bullet during the party’s rally in Ado Ekiti, the Ekiti State capital.

INEC has scheduled the State Governorship election for Saturday, July 14, 2018.