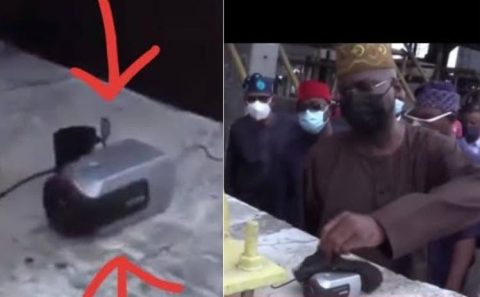 (AFRICAN EXAMINER) – Reactions have trailed the news report of the discovery of a hidden camera in Lekki toll gate by the minister of works and housing, Babatunde Fashola.

According to the report, the former governor of Lagos State discovered the camera while on a tour to ascertain the level of carnage in the area.

Fashola accompanied by Governor Sanwo-Olu saw the camera and handed it to the governor so that it will help in the ongoing investigation.

Reacting to this development, many Nigerians likened the former Lagos governor, to American actor, Kiefer Sutherland, (Jack Bauer) who is known for his role in investigating cases in movies.

It also surprises many that the state cleaning agencies have swept the area, Governor Sanwo-Olu has also gone to visit the place before and no one discovered the camera.

African Examiner brings some reactions below:

VictoriaKperogi@JacobsVictoria8 writes: “Fashola! The man with the invisible eyes.”

BLESSEDSINNER@yungscofield writes: “The funny part is the camera was place not hidden and no dust haa fear who no fear politicians.”

RAYMOND Zeigler@akinsemoyin1 writes: “Just imagine these politicians taking us straight to cartoon network what do we call this? inspector Pink Panther …. Discovering a neat camera after days of protest, burning, shooting, looting, nonsense no b only discover na disfind.”

Ogbonna Kyrian Nnanna@kyrian nnanna writes: “Na him keep am there.”

Chibreezy@Chibreezy4 writes: “And the camera was clean oo…so u are saying camera that is lying around up to 6 days will look clean like that? Na wa oo #ENDSARS.”

Contentment@_Brainie writes: “Jack Bauer will be looking like oh wow this Fashola of a guy sabi this thing pass the professionals that did detective training sha.”

Queen of zarmuda@marbella young writes “Hello dears who has seen the video of fashola jack Bauer who they said found the hidden camera that has evidence of what allegedly happened at the Lekki toll gate? Ah I must not see this people in heaven or I will be vexed.”