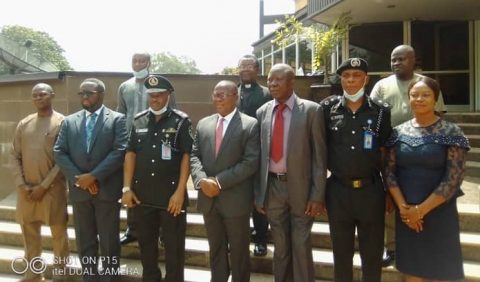 (AFRICAN EXAMINER) – As part of measure to  boost the morale of officers and men of the Enugu state police Command so that they can return to their duty Posts, the Professor Felix Asogwa, led Institute For Peace, Conflict and Development Studies, (IPCDS), Enugu state University of Science and Technology (ESUT), has begun  a  2- day retreat for the security operatives.

Our Correspondent who covered the event in Enugu, reports that the conference is coming barely a week after the state governor, Ifeanyi Ugwuanyi, visited  leadership of the command and  appealed to the operatives to go back to work.

Policemen in the state, have refused to return to their duty Posts since the violent youth protest ended, despite repeated directives in that regard by Nigeria’s Inspector General of police, (IGP), Mr. Mohammed Adamu.

Speaking during the ceremony, organized by the Institute in partnership with the Enugu state government, and the state Police Command, Governor Ugwuanyi, who spoke via Secretary to the state government, (SSG), Professor Simon Otuanya, reiterated his appeal to the police personnel to return to their duty post.

He urged the Rank and file of the command to put behind them what transpired during the #ENDSARS protest and renew their ultimate commitment towards the protection of  lives and property of citizens in the state.

While assuring the Command of his administrations support at all times, the governor, noted that residents of South- East region, including Enugu state, cannot afford to celebrate this year’s Christmas and new year festivities without policemen on the roads.

In his remark, the state Commissioner of Police, Sheikh, Ahmad  Abdur- Rahman, who spoke emotionally, regretted that hoodlums hijacked the #ENDSARS protest and used it to unleash terror on the Nigeria police family.

He said “the event of today came up as a result of the drama called #ENDSARS, protest, during which our policemen were dejected, rejected, psychologically tortured, and dehumanised by same people they are protecting.

According to the Enugu CP, “during the protest, we saw policemen being killed like common criminals, maimed, one of them in Enugu was hacked to death, after which his killers set his dead body ablaze, even cut parts of the roasted body and started eating it like meat.

“Only Almighty Allah can bring consolation to us in the Nigeria police, this has never happened in any part of the world.

However, this retreat is aimed at talking to our men on the need for them to return to their duty Posts, because the IGP has given we the Commissioners the mandate of ensuring that they get back to work.

Director of the Institute, professor Asogwa,  in his speech, regretted that the #ENDSARS protest was hijacked by bunch of criminal elements who always see the police and other security agents as arch enemies.

“The criminal elements that hijacked the protest and perpetrated the arson against the policemen, are those who are always uncomfortable with their presence on our roads.

“They want the police and other security operatives to quit the roads so that they will continue to terrorise innocent citizens.

Professor Asogwa,  explained that the event, christened:”2-day post crisis revamp of police officers morale in Enugu state was designed to motivate, and boost the down morale of the security personnel who were dehumanised, physically and psychologically tortured by criminals hiding under the guise of protest.

The University Don, stated that the security operatives killed during the violent protest have joined their colleagues who had in the past  after making sacrifices paid similar  supreme price, while serving their father land,  positing however, that  no nation across the globe, including Nigeria can survive or make any  meaningful headway without security operatives.