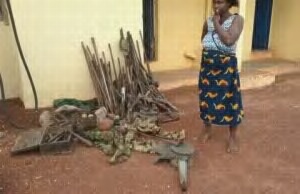 The police in Enugu have arrested a widow and mother of four, Mrs Juliet Nwachukwu over her alleged involvement in gun running.

Picture of the widow, and some of the seized arms.

According to the police, the widow’s arrest followed the raid of a gun manufacturing company located at Ihuoha Amansiodo Oghe, in Ezeagu Local Government Area of Enugu State.

The state police public Relations officer PPRO, Ebere Amarizu who disclosed this to African Examiner on Saturday in Enugu said that the illegal company serves as an arms market for criminals.

The command’s image-maker, hinted that the principal suspect, who is now at large, relocated some of the arms when he got wind of police’s move to search the place.

“On her part, Juliet admitted that the guns and the tools were brought to her two days ago by the manufacturer who did not tell her reason for bringing them to her house.

She, however, revealed that Ejike has been a manufacturer of gun for sometime now and regretted accepting the guns from him.

So many finished and unfinished guns with some live cartridges as well as tools for manufacturing the guns were recovered by the police.

The PPRO stated, that “full scale investigations into the incident have commenced, just as manhunt on the fleeing suspect is intensified, while Juliet Nwachukwu is now helping the police in their investigations.”