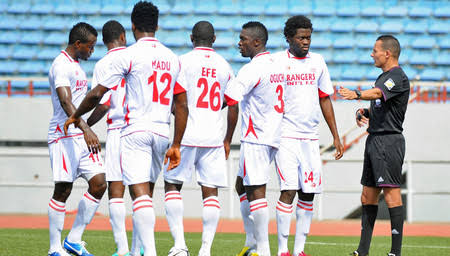 The 32 years trophy jinx was broken after the Enugu club side, humiliated their visiting opponents, EL Kanemi Warriors of Maiduguri 4-0 in the week 38 and final match of the season played at the Nnamdi Azikiwe stadium Enugu.

It would be recalled that the Enugu Flying Antelope won their last trophy in 1984.

The Imama Amakapabo’s boys, opened goal line at exactly 3 minutes into the 1st half via a penalty shootout by Chisom Egbuchulam, jersey NO 11.

Rangers second goal came 43 minutes in the 2nd half through Osas Okoro, jersey No 7, even as Chisom Egbuchalam added another two goals making it 4 for the Enugu team.

The new club was however, handed the sum of 40 Million naira by the Shehu Dikko led League management company LMC, after they were officially crowned as the champion.

With the development, Rangers has booked a ticket to represent Nigeria in next year’s CAF competition.

The Match, was graced by scores of Rangers fans who filled the 25, 000 (twenty-five thousand) capacity Nnamdi Azikiwe stadium to the brim.