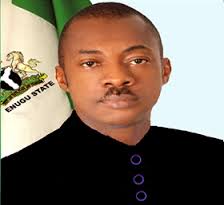 It was tragedy-comedy at the Enugu State government House Tuesday as Governor Sullivan Chime ordered that an aero contractor helicopter that erroneously landed at the government lodge be impounded.

The helicopter, which was said to have been chattered to fly the corpse of former member of the Anambra State House of Assembly, late Hon. Andy Umeoji mistakenly landed at the Enugu government lodge instead of the nearby House of Assembly complex.

Umeoji’s corpse was said to have arrived Akanu Ibiam International Airport, Enugu from overseas via Murtala Mohammed Airport Lagos, and was being taken to the Enugu State House of Assembly for a valedictory session before the unfortunate incident.

According to the Chief Press Secretary CPS to the State Government, Barrister Chukwudi Achife, all three crew members of the chattered helicopter which was said to have caused security breach and heightened tension at the government house have been handed over to the police.

In a statement made available to African Examiner in Enugu, Achife confirmed the incident.

“At about 10.30 am today (Tuesday), a helicopter bearing the markings of Aero Contractors landed without permission at the Governor’s lodge. The mission of the visitors was unknown to the government.

“After preliminary inquiries,the Chief Security Officer to the Governor Mr Fidelis Ogarebe, handed the three occupants of the aircraft -two pilots and one Engineer – over to the State Police Command for further investigations.”

When contacted, public Relations officer PRO of aero contractor,  Simon Tumba, pleaded for time to respond to the development but never got back to our correspondent till press time.

The valedictory session was organized by the state hallow chamber as mark of honour for late Umeoji, who himself was a former member of the old Anambra State House of Assembly in 1983.

It would be recalled that the Enugu State Government House was recently attacked by the Biafran Zioniat Federation, BZF.