Fani-Kayode Set To Get Cabinet Appointment 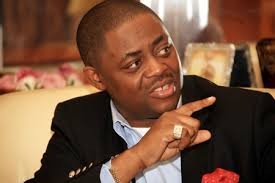 Former Minister of Aviation, Chief Femi Fani Kayode may soon bag a fresh federal government appointment if the deal between him and President Goodluck Jonathan is anything to go by, Newspot Nigeria can authoritatively reveal.

Fani Kayode had held a closed-door meeting with President Jonathan in the previous day on his possible decampment from the All Progressives Congress (APC) into the Peoples Democratic Party (PDP).

His meeting with President Jonathan, it was learnt, was facilitated by the Minister of State for Defence, Musiliu Obanikoro, Ondo state governor, Dr Olusegun Mimiko, Chief Akin Osuntokun and other top cabinet members.

President Jonathan’s Special Assistant on Information and Public Matters, Dr Doyin Okupe, currently in the United States was also listed as part of those who facilitated the meeting between the President and the former Aviation Minister.

Fani Kayode has of late been expressing misgivings on the nature of politics in the APC and had openly protested against the plot by the party to install a muslim-muslim as joint ticket bearer for the party in the 2015 Presidential election.

He had predicted through his articles published on-line and in some national dailies lately that APC would crash by its insistence on a muslim-muslim ticket for the 2015 Presidential election.

Fani Kayode wrote, “I have said it privately in countless political meetings and I will say it publicly today. Please mark it – the biggest mistake that my party, the APC, can make is to field a Muslim/Muslim ticket in the 2015 Presidential election.

“If we do that we will not only offend the Christian community, but we will also lose the election woefully”.

His suggestion to APC on religious issues seemed to have fallen on deaf ear when one of General Muhammadu Buhari’s die hard supporters, Mallam Nasir El Rufai, rather controverted his position.

El’Rufai in dismissing Fani Kayode said the APC would bother less on the muslim-muslim ticket issue as long as it would be able to install a team with the clout to dislodge President Goodluck Jonathan in 2015, religious issue notwithstanding.

One of President Jonathan’s aides who pleaded anonymity in a chat with Newspot Nigeria said Jonathan was told that Fani-Kayode resolved to join the APC in protest against his alleged victimisation under the government of PDP, and not that he was aversed to the PDP being in power.

There have been attempts in government quarters to jail the former minister over an alleged misappropriation of aviation funds running into several millions shortly after he left the President Olusegun Obasanjo’s cabinet.

The Economic and financial crimes Commission (EFCC) had equally arraigned the former Minister more than twice in court on 47-count charges on the sum of N230million said to have been found in his private account.

The former minister, according to some of his close friends started getting frustrated with the PDP government amid consistent amendment of cases against him in a manner that suggested that he was to be jailed at all costs.

Fani-Kayode is however to formally decamped into PDP after due consultations with other PDP leaders, Newspot Nigerian learnt.