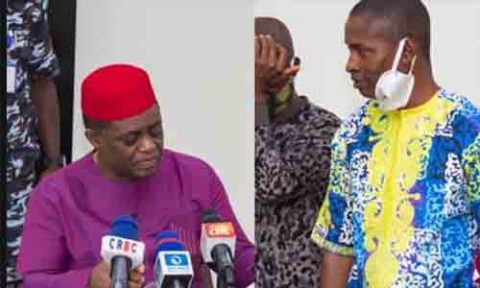 African Examiner had reported that the ex – minister verbally assaulted a Daily Trust reporter, Charles Eyo, in a press conference in Calabar as the reporter asked  the former minister who was “bankrolling his trips” as he has travelled to some PDP states earlier inspecting the  projects of the governors before stopping at Calabar.

Fani-Kayode lost his cool and hurled insults at the reporter but he later apologized after series of backlash.

However, it seems Daily Trust will not sheathe its sword as an opinion article written by Iliyasu Gadu for the paper titled “Drug Addled Thug In Designer Wears” shredded the ex-minister into pieces.

Part of the article reads: “Last week, FFK was at his yobbish worst during a press briefing in Calabar where in response to a question from a Daily Trust reporter Eyo Charles as to who was financing the trips he (FFK) had been embarking on round the country, he let rip at the poor reporter.

“Suddenly FFK who takes it as licence to hurl volleys of invectives at just about anyone in Nigerian public life had his thin skin exposed. Like a boxer with a glassy jaw, which the gentlest of jabs was all that was needed to shatter his thinly covered veneer of respectability was ruthlessly exposed.

“His latest oafish behaviour, it is about time FFK met his comeuppance. His verbal assault at the reporter should be seen as an attack at the very profession that provides him with the necessary oxygen and limelight to remain relevant in the Nigerian public space. If he did to a lawyer in the legal profession he belongs to the journalist in Calabar he would have faced immediate sanctions. (Ask Governor El Rufai).

“Suffice it to say he is not even reckoned with in the legal profession. Even the so-called “charge and bail’’ lawyers one sees often hanging around courtrooms are likely to have better records of achievement in the profession than him.”

Reacting to this development, the former minister in two separate letters dated August 30, described the article as a false publication which was written to defame him.

The letters, signed by his lawyer, Adeola Adedipe, were issued to the Managing Director of Media Trust Limited and also the writer, Mr Gadu.

Adedipe said: “That he lacks character training in the best traditions of an English man and therefore unfit to be an alumnus of the prestigious Cambridge University and University of London; he is not fit to have been called to the Nigerian Bar, as a Barrister and Solicitor of the Supreme Court of Nigeria.

“That he is not only a bad ambassador of the People’s Democratic Party but is also not worthy to hold any political office; he is an endangered species, which should be avoided by all and sundry, particularly journalists.

“Without mincing words, you have disparaged our client by your remarks, in the eyes of right-thinking members of the society: and these remarks have been found to be false and slanderous of him.”

Adedipe also stated that Fani-Kayode apart from suffering immeasurable loss of goodwill, he is also facing harsh criticisms from fans, followers, and colleagues across the globe.

According to the letter, Media Trust Limited, the publisher and Mr Gadu have 14 days to respond to the demand for a retraction, apology on two national dailies and the sum of six billion naira as compensation.

Adedipe stated that the failure of Media Trust Limited, the publisher and Mr Gadu to issue the apology and retraction will “leave our client with no preferred alternative than to seek redress in Court. This redress shall also include a claim that you are unfit to function as a journalist because your defamatory and slanderous remarks were borne out of an inept appreciation of basic codes of journalism”.