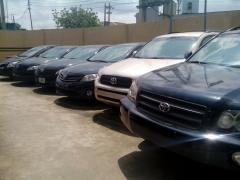 African Examiner learnt that the suspected robbers usually steal from different parts of the country and sell them off in the neighbouring country.

According to him, two locally made single barrel pistols and assorted ammunition were recovered from suspects, adding that the FSARS led by the Deputy Commissioner of police, Mr Chris Ezike was able to arrest the suspects in Ekiti, Abuja and Lagos after complaints by a victim whose cars were stolen in Lagos.

Mba stated that one of the suspects was arrested in Lagos with the Black Berry hand set phone of one of the victims leading to the arrest of two members of the gang in Ekiti who claimed to be APC members.

“The confession of the suspect in Lagos led to the arrest of one Omoniyi Ajewole, 28 years old, who claimed to be a political thug in Ekiti. He claimed one Odeyemi Itunu, aka ‘Gomina’ gave him a gun.

“Under interrogation, Itunu claimed he was an Executive Assistant to Gov Kayode Fayemi of Ekiti State. He confessed to have given the gun to Ajewole to protect them during election period.

“The suspect claimed Ajewole was his Personal Assistant; unfortunately, he was arrested before Ekiti election. They are involved in robbery and politics. They would soon be charge to court,” he told journalists.

He warned that the police would punish severely anyone caught fomenting trouble during the Osun election next month, saying the police was aware of the time and responsibilities, adding that the Inspector-General of Police had directed all commands, units and zones to commence massive mop up of illegal arms in circulation nationwide.

In particular, in this specific case, no retrospective action can be taken by the FIFA Disciplinary Committee, since the incident involving the Colombian player Juan Camilo Zuniga Mosquera did not escape the match officials’ attention, which is the first of two cumulative and necessary conditions for art. 77 a) of the FDC to be applied.

It is important to note that the conditions by which the FIFA Disciplinary Committee can intervene in any incident have to be considered independently of the consequences of that incident, such as an unfortunate injury suffered by a player.

Finally, as a general remark, FIFA and the FIFA Disciplinary Committee regret any incidents occurring on the pitch that in particular have a negative impact on the health of players.

We wish Neymar a prompt and complete recovery as we wish the same for all players who have sadly been ruled out of the World Cup through injury.

With regard to CBF’s request for the cancellation of the caution shown to the player Thiago Emiliano da Silva during the match played against Colombia, the chairman came to the conclusion that the FIFA Disciplinary Committee cannot consider the matter given the fact that there is no legal basis entitling it to grant such request.