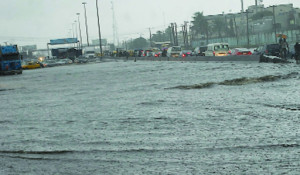 (AFRICAN EXAMINER) – No fewer than 40 villages have been sacked by flood in Adamawa, News Agency of Nigeria reports.

Dr Muhammad Sulaiman, the Executive Secretary, Adamawa State Emergency Management Agency (ADSEMA) said on Saturday in Yola that the development followed heavy downpour recorded in the last three days in some parts of the state.

“In August this year, we lost 15 persons, hundreds of people were internally displaced, and thousands of farmlands and domestic animals were lost to the flood.

“Now within the last three days, over 40 villages in five local government areas of Adamawa were over-run by flood following heavy torrential rainfall.

He urged the federal agencies and United Nations Organisations who promised assistance to the victims of the August flooding to redeem their pledge.