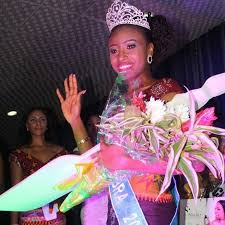 The former miss Anambra was de-crowned following the appearance of a lesbian sex video involving her and another girl.

She said the lesbian sex video was the handi-work of her enemies who were hell bent in blackmailing and tarnishing her image.

Okeke, who had earlier concluded arrangement to address a press conference Tuesday at the Nigeria Union of Journalists NUJ, press centre in Awka,the Anambra state capital, on the issue, suddenly cancelled the plan, even when newsmen had already gathered at the venue.

However, a post on the ex- Beauty Queen’s Facebook wall, stated that she had been warned not to go to the venue of the press interaction, or risk being assassinated.

She said: “Considering the need to make the world know the truth about the trending scandal, and what we have been going through before then and now, I decided to hold World Press conference at the NUJ Press Centre, Awka today.

“But from the moment I made public this intention, I have been under siege of threats by my blackmailers and traducers.

“They are seriously threatening to shoot me at the press conference if I ever open my mouth to say the real truth about the ugly episode.

“Since I have no protection and if I die now the truth would be buried forever, it’s my intension to sacrifice myself to save not just myself but other girls and other upcoming pageant by letting the world know the truth and what we go through.” Okeke stated.

You will recall that both the social and conventional media had been awashed with the lesbian scandal story involving the former miss Anambra.