From Execu-thieves to Law-breakers: A Tale of Greed, Egotism and Corruption 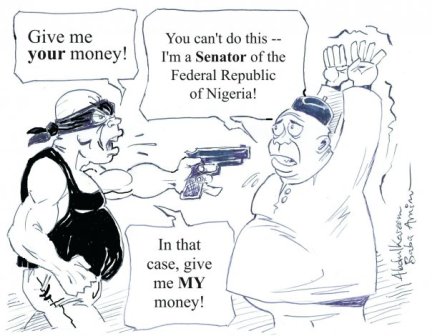 It always comes down to this. How selfish, greedy and insensitive can some of these our rulers be? They are parasites feeding fat on the blood of the people, causing untold miseries and are like malignant tumours that just will not go away.

Eight years as a governor of an oil-rich state, with thieving hands in the treasury every day, no visible or beneficial people-oriented development despite the billions allocated to the state each month of eight years, and then wants to head to the Senate, to be a legislator, to make laws for us; the same laws they routinely and flagrantly flouted, ignore and abused during their times in office. This is just Delta State, but the scenario is replicated by most of the executive governors in the 36 states of Nigeria. The two-termers amongst them are gearing up to go to the Senate (I wonder why they never consider the House of Representatives) after their expiry date. Sadly for the helpless people, it has become an automatic ticket for them. They are almost always guaranteed election, forget the election. 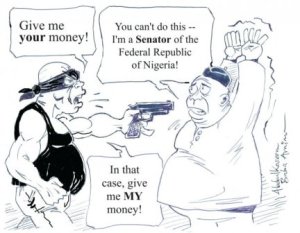 To do what, if you ask me? To help make the laws that will perpetuate themselves in constant treasury-draining and keep the masses perpetually impoverished; earn huge salaries that guzzles a huge bite out of the federal budget, while not adding any value to the society or the polity.

Having said all of the above, I am not unaware that their success of being elected to the Senate or wherever they want to be depends, or should depend, on the people, the electorate. And that is what some people will be quick to point out to me. No problem. But knowing my country, my people and my politicians and the irresponsible and duplicitous way we have been running and ruining our democracy and turning it on its head, we all know that the sincere electorate may not have any effect on the outcome of elections. Therefore, instead of rejecting these ilk of politicians, our votes may not even count, as has we have times without number found out to our chagrin and cost. This is what we are observing today and seeing our country being run to the ground without shame by obtuse politicians and rulers

Why don’t they just retire to their villages and enjoy the fruits of their loot? No, they want more money, and more power, and want to be relevant despite not relating in their eight years of making the lives of their people miserable and uncomfortable.

Please don’t get me wrong. I am not unaware of our and their Constitutional rights. They are entitled to go for any political position they want, even if after being in government or holding political position before; this occurs in the United States and the United Kingdom too, but with the reality that we know what these latter have done, are doing and will continue to do for the benefit of their constituent and people. But even in the US, you will hardly have a State Governor jostling for the right to go to the Senate or the House of Representatives after his tenure. It is “live and let others live”. They have done enough for their people; time to go, let go and let someone else continue with their good works and the solid foundation they have laid down.

In my dear country, it is “live and let others die”. It is an abject exhibition of self-centredness, conceit and insensitivity. Whilst in power, they half-heartedly execute the projects they are elected and paid to do with great fanfare and inflated costs, with only self-interests in mind; what they or their families and cronies will gain from it and then loudly commission such projects as if they are doing a favour to us by building roads that do not last for six months until washed away by the rains, bridges that collapse after one year, meaningless schemes and ventures, and other white elephant schemes that are abandoned after only a short while; the funding for them disappearing into thin air, etc.

They want to be there forever because they think it is their right. They are the only ones who can do it; who can rule us! They have a monopoly of knowledge, skills, expertise and ability. They also have access to a lot of money, mostly stolen from the people they want to go and “represent”. Nobody else can, so it is for them only. They reason they are the only ones who can change things; things they could not change or failed to change in eight years of abusive and profligate executive tenure. But they say, “Give us a chance, and we can change Nigeria when we are lawmakers”.

And when they eventually get to that discredited and dishonourable House, which is now a retirement home to thieving and incompetent ex-Governors, undistinguished military generals, the politically mediocre and other politicians of dubious identities and characters, all they do is sleep throughout the sessions, collect their massive salaries and emoluments (arguably, the highest in the democratic world), do deals and run after government contracts and then, cause trouble in their home states by trying to exercise undue influence on the running of the state. In the Senate chambers, already suffused with ex-governors and ex-military officers of the same ilk, all they do is sleep, reminiscence on their past bad governance, glorify in their inflated and damaged ego and dream of the loot they will be taking home monthly

They consequently add more to the corruption and dishonour of the legislative arm of government, because they bring experience of looting, manipulation and indifference with them to an already corrupt and sweltering inept environment.

I am aware that Power is a drug; but only to those who get addicted to it. Unfortunately, it seems most of our rulers and politicians get addicted to power, which again, unfortunately, they do not even know how to wield, control or manipulate to benefit anybody, not even themselves on the long term. Power and authority, to a Nigerian is like being a mini-god. Most time, their sycophants, political jobbers and praise-singers drag our rulers to that deluded state of mind. But God has given us, eyes to see, ears to hear and brains to think and remember. Unfortunately, look at the people ruling us today and what one discovers are the same people who ran previous governments aground. However, they fail to believe that God has a way of doing things. If Nigerian politicians were to use their eyes, ears and brains, and reflect on the Babangida and Abacha eras they will realise that nothing is impossible. The signs are all around us.

Why is it that once anybody, be they existing politician, businessman, civil servant, or anybody in any capacity of endeavour get a taste of politics, they then turn politics into a career, and in the process, on its head? An engineer, or medical doctor, or teacher or banker is elected into a political position, and the next thing, he becomes a permanent politician. After their tenures in office or position, it becomes extremely difficult for them to return to their original calls in life and live ordinarily as they had previously, pre-politics lived and worked, but now their entire lives and livelihood are dependent on being politicians. They do not know how else to survive or make a living. These even include Ministers and State Commissioners, who are supposed to be technocrats and experts in their discipline before being appointed into government.

I may even be able to defend them, if they had added value and made impacts on the lives of the people who elected them in the first place, and the people are beseeching them to remain to continue their good works; but No, it is the most unworthy and corrupt of them that will “do-or-die” to remain in position or aspire to another position.

Of course we know the reason. The fastest way, and perhaps the easiest and least risky ways to make colossal amount of money in Nigeria is to be a politician, and continue to be one. You will even get away with it if and when caught. The trick is to steal billions, so that you can have the best lawyers and pay off the investigating and prosecuting authorities, and still have billions left to enjoy the rest of your life. How many corrupt ex-governors and other thieving politicians and civil servants have spent a week in prison after the initial noise and arrest? Abracadabra, the EFCC quietly and corruptly doze off, files disappear, witnesses disappear, EFCC lawyers collaborate with the defence lawyers to apply delaying tactics and the compromised judge keeps adjourning cases, until the public gets weary and just say “Leave him to God”. Who lost out? It is the Nigerian people, again and again. And the thieves and their collaborators smile all the way to the bank again.

Well anyway, my President has said Stealing is not the same as Corruption, so who am I to altercate him?

I refer to one of my favourite stories again. There was once an American robber called Mr Willie Sutton. When he was asked why he robbed banks. He replied: “`Cos that’s where the money is”. It was an uncomplicated philosophy which served him well until he was caught and marched off to prison. We can apply this analogy to the Nigerian politician. Why are they in politics and want to be in government? It is because in Nigeria, politics and government are where the money is. This is where and how some of us can make fortunes with very little effort. The money is there to be taken, even asking to be stolen, so where else to be than to pretend you want to serve your country and its people, and you are suddenly in charge of, or have access to billions of Naira, staring at you and practically saying “Take me; nobody will get you for stealing; it is allowed; everybody does it here”.

The ideals of free and fair elections, no rigging and vote/election manipulation, acceptance of defeat, no thuggery and one man, one vote, can no longer be relied on. There is absolutely no guarantee that the people will not vote them in.

However, I will still urge and plead with my people NOT to let these disastrous rulers of their states realise their inordinate, perverse, self-seeking, narcissist, insensitive and uncaring ambitions. Most of them are supposed to be in jail, not making laws for us in the Senate.

Does that make any sense?

Let the TRUTH be said always!