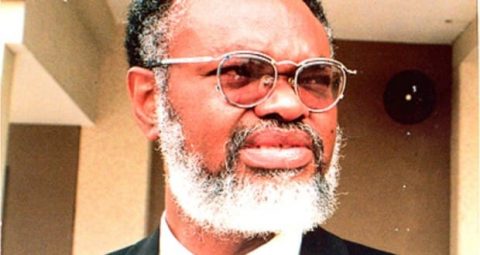 African Examiner recalls that Williams was a Lagos gubernatorial aspirant murdered in 2006.

Bode George in a statement released to the press stated that it has been 14 years since the death of Williams occurred and he wondered why his killers are yet to be found and brought to justice as his death scuttled the hopes of many Lagosians.

He said: “He was gentle but reflective with sharp analytical convictions. There was always certain piety about him, an effective calibration in self-effacing innocence. He meant no harm to anyone. But he was firm, resolved, dedicated to the righteous path.”

Bode George while commending the president for reopening the investigation into the death of former Minister of Justice, Bola Ige, also enjoined the president to do the same with Funsho Williams.

“It has been 14 years now when a terrible dark cloud fell upon the Lagosian entity and upon all lovers of freedom. It was really a very sad day on that horrific July 27, 2006, as the blood-soaked body of Engineer Funsho Williams was discovered in his Dolphin residence in Ikoyi.”

“With the murder of Funsho Williams, who stood at the threshold of triumphing at the general election, a great dream was shattered. The hopes of millions of Lagosians who were hearkening to be rescued from what was then building up as a gradual servitude of the Lagosian natives was dashed.

“I am particularly passionate about Funsho who many of his acolytes adorably called captain. Funsho was my junior at the University of Lagos. We were both Engineering students but sprung from different departments. While he was in Civil Engineering, I was in the Electrical Engineering Department.

“Those who killed Funsho Williams might have killed a man but not his dream of rescuing and salvaging our society. We continue where he stopped.

“He will be greatly enhanced in historical reckoning and signification if his administration is attested as being the one that finally nailed the evil characters hiding in plain sight who murdered Funsho Williams.”

However, some Nigerians on Twitter have expressed their views concerning the death of Funsho Williams and Lagos State. Here are some of their views.

Emmanuel Ivwurie@Emmanuellvwurie writes: “I drove past Funso Williams Avenue now and saw mallams selling Ram on the curb by Tejuosho junction. The place is FOG Spot. I felt so pained. Is this what Lagos is turning to?”

‘Yemi Adebowale@yemi_adebowale writes: “Funsho Williams fondly called‚ captain‚ was a man who stood above men‚ literally and figuratively. He stood above six feet and usually wore a serious look. Unlike the Lagos landlord, he had no controversies about his certificates or degrees, a proud Gregorian.”

Demola Olarewaju@DemolaRewaju writes: “Those who think that by ending a life they can erase a legacy or destroy a memory must be in discomfort today as in many areas of Lagos, Engr. Funsho Williams is being remembered today, 14 years after his brutal murder. Kudos bro, for the effort – history remembers!”

Ladja@Adelajaking writes: “Which June 12 , you need a history class. Bucknor / Falae and Co did the work. Funso Williams was the original beneficiary of the position as the Govnor. Anyone Ngige never presented a fake degree from Chicago. #askLateGaniFawehin.”

JT@Jesutodudu writes: “I still remember the day Funsho Williams died. You’d think the perpetrators will be caught immediately coz he was a prominent person. 14yrs down the line, no news, no suspects, nothing! Some people benefited directly from his death, yet, they were not investigated. Rotten city.”

Mr Anene Atagbuzia@aneneatagbuzia writes: “Shebi the result of the investigation of his murder is the renaming of Western Avenue to Funsho Williams Avenue. I love my country, no be small!!!”

GbadeboRhodes-Vivour @GRVlagos writes: “In deciding to join the Lagos State Civil Service, Williams only towed the path of leadership through public service for the betterment of our Lagos. He was part of a larger team that oversaw the construction of over half of the roads, streets and bridges erected across Lagos.”

GbadeboRhodes-Vivour writes: “On entry in to politics, Funsho Williams organized a political structure so formidable and entwined around himself that to stop it required the cutting down of the man himself by those who felt threatened by the moving train that he was.”