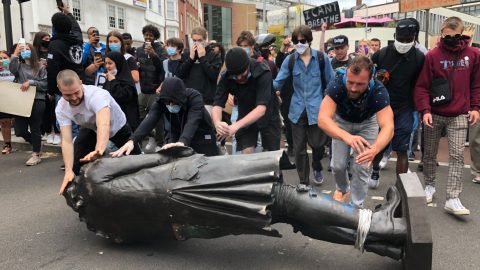 (AFRICAN EXAMINER) – Protesters have pulled down a famous slave trader’s statue, Edward Colston in Bristol, UK, as anti-racism protests entered its day two across the country, following the death of an African-American, George Floyd.

The incident occurred after peaceful demonstrations in central London Saturday in which clashes were recorded between the protesters and police.

On Sunday, there was mass protest outside the US Embassy in Nine Elms, near Vauxhall, south London, while other protests held in cities like Manchester, Nottingham and Edinburgh.

However, his warnings and that of Health Secretary, Matt Hancock not to congregate and risk spreading the coronavirus were ignored as the actions raged.

Protesters in London staged actions outside the US Embassy for a second day.

Colston is believed to have transported about 80,000 men, women and children from Africa to the Americas.

On his death in 1721, he bequeathed his wealth to charities and his legacy is visible on Bristol’s streets, memorials and buildings.

After the statue fell on the ground, a protester posed with his knee on the statue’s neck in memory of the video showing late Floyd, who died while being anguished by a Minnesota police officer.