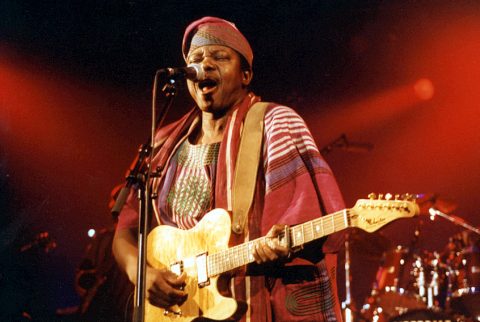 Chief Sunday Adeniyi Adegeye, the legendary juju musician popularly known as King Sunny Ade deserves the four-month-long celebration of his 70th birthday which began on September 1, marked with great attention on September 22, the actual date of his birth, and scheduled to run till December 31, 2016, in the United States, Nigeria and the UK. With two Grammy nominations, over 50 years of genius-level achievement as a musician, and over 120 albums, many of which remain evergreen, King Sunny Ade has proved his mettle as a world-class musician, a true artist, an impresario and an astute businessman.

This great Nigerian artiste is better experienced in performance. I still watched him on stage in Ibadan about two weeks ago, and characteristically, he remained on stage for hours entertaining guests with dexterous dancing, his mastery of multiple instruments and the infectious joy with which he performs his task. It is hard to believe that the old man is actually 70. He looks today almost exactly the same way he looked more than a decade ago. He keeps belting out new songs, and winning new fans. His humility on stage is impressive and that is something many of these one-album, two-album mega stars of the new generation of musicians should learn from King Sunny Ade and other members of his generation.

King Sunny Ade makes music, particularly the juju genre to which he has contributed greatly and helped to build into a global brand, seem like something really easy and effortless. He is above all, a cross-over artiste, a polyvalent genius. All true art appears easy. The mark of a true artist lies in his originality and commitment and innovativeness. The full distillation of genius places the depth of the rigour at an aesthetic distance, to be discovered instantly and vicariously but with the full impact of talent in view. KSA’s career is a living example of how originality, endurance and determination usually pay off in the long run. In the early part of that career, he faced very stiff competition from the likes of Ahuja Bello, Emperor Pick Peters (e ki lo fo’mo ode ko ma rin ni pa do…), Y.K. Ajao, Admiral Dele Abiodun (Adawa Super Sound): equally talented musicians who came onto the scene at a time when the public valued and recognized creativity and true talent.

As it turned out, KSA’s main rival was Chief Ebenezer Obey: and that rivalry endured and stood out because while both are juju musicians, they did not try to copy each other, and the originality of the one accented the uniqueness of the other, providing a complementarity that the public cherished and patronized even if the rivalry was also a victim of mischief. Today, both King Sunny Ade and Chief Ebenezer Obey now in their winter season may not wish to dwell too heavily on that season of their careers, and that is perfectly fine, but what we remember is how that competition promoted the art and the sub-genre of juju melody and percussion. But note this: yet another critical moment in KSA’s career was the emergence of a younger generation of juju musicians.

The combination of Segun Adewale and Shina Peters, for example, almost drove KSA off the juju scene and when that superb collaboration collapsed, most regrettably I must say, and Shina Peters seized the market with Afro-Juju, a greater deployment of syncopation, melody and instrumental wizardry (Shina Peters posed a threat to KSA not to Ebenezer Obey in this regard), the King’s career again seemed threatened.  There was also Dayo Kujore (Osupa ti de, Osupa ti de o, oba irawo), or Dele Taiwo (the Shina_Peters initial clone who later stood up for himself), or well, Micho Ade (Ogun Laye). But KSA has survived all odds. He took dangerously ill at a time and yet he survived. His music producer disappointed him. He set up his own label. His band boys have abandoned him more than twice in the last 30 years, he simply disbanded and put another team together. In the face of every adversity, he has worked hard to prove that he is a master of the game, if not the overall owner of it.

As he turns 70, we salute his resilience and courage. We recommend a special focus on how this particular artiste is completely self-made. When I interviewed him for The Guardian more than a decade ago when he was still President of the Musicians Association, PMEAN, he actually confessed to me, that he practically learnt to speak English through personal effort. But during the interview, he had a laptop in front of him. Too many young artists today behave as if they know it all, or rather they are convinced that they already know more than enough. Sorry, nobody ever knows enough. That is why Professors of more than 50 years are still burning the midnight candle. If King Sunny Ade had not been a musician, he probably would be a university Professor.  He recently launched a radio station in Ondo state, and he is planning to set up what he calls King Sunny Ade Musical School.  Baba 70,  ko fe gba, and although he is a home boy, stubbornly attached to his natal roots, he is a nationalist as an artiste.  That is yet another lesson for the younger generation. KSA is a master builder. And the builder of the foundation is also a good watchman. Many young artistes are master spenders. They live it up.  They are showy and flippant. They miss the big issues. Art requires depth. We find in King Sunny Ade’s art, uncommon depth and rigour. That is what we celebrate and salute.

The aesthetics of KSA’s music should be the subject of in-depth academic inquiry.  I may be wrong  but I am yet to find such a contribution beyond lame hagiography, but since a newspaper article cannot be devoted to the slightly arcane subject of musical aesthetics and ethnomusicology, I will not even attempt any pompous statements in that direction, but I can say this safely: that King Sunny Ade has done a lot for Yoruba, Nigerian, and African culture on the global stage. He is not yet in the same boat as the inimitable Fela (Fela belongs to the one-name Pantheon of geniuses from Aristotle to the Pope), but whenever anyone deems it necessary to create a Nigerian Hall of Fame or a museum of the arts, there is no doubt that King Sunny Ade’s place is fully assured as Nigeria’s extra-ordinary cultural ambassador and nationalist.  As band leader, composer, singer and artiste, his accomplishments are huge and remarkable. Between him and others in the second generation of the percussion-infused, potentially growing juju music genre in Nigeria, they have sustained the legacy of the pioneers in that genre: Ayinde Bakare, Moses Olaiya, I.K. Dairo, Dele Ojo, Tunde King Nightingale, Bobby Benson, Kokoro, Irewole Dengel, Adeolu Akinsanya, Ambrose Campbell.

The content of his music, the shape, the sound, and the tone of his art reveal a nationalistic spirit and a positive conscience that promote culture, values, unity, love, progress, development and progressive leadership. King Sunny Ade has successfully avoided a likely identification as a partisan politician also, but his music is indeed intensely political: he is a politician for national progress and so he makes friends across all bridges, with his voice and associations. In the long run actually, every artist is a politician, because artists serve the people, the market place of art is in the people’s minds, whether the subject is love, unity or life’s many vanities.

Artists are not expected to be perfect human beings. I do not think that anyone would describe King Sunny Ade at 70 as a perfect family man. His stories convey the impression of an extra-ordinarily adventurous and creative man on the romantic front. But if we judge creative persons with the same standards with which we judge ordinary people, there probably would be no art and no creativity. Some of the finest works of art in human history have been produced by the most unusual souls: differentness ironically produces such illumination previously unknown. For anyone who may have misgivings about KSA, or any other artiste, let them focus on the art and not the persona.  Under the shadow of every genius, stories are bound to sprout and become flowers.

Where is government? Both President Muhammadu Buhari and the Minister of Information remembered King Sunny Ade on his birthday. Very good – I know how that works. I issued many of such statements. I suppose that King Sunny Ade and all other Nigerian artistes in the various genres: plastic, visual, imagic, theatrical and spatial will be most delighted, however, if government’s celebration of individual artistes or a group such as Nollywood is translated into a coherent National Cultural Policy or an Endowment for the Arts which properly recognizes the fundamental rights of artistes as nation-builders and the strategic place of the creative industry in the leadership process, Nigeria will gain a lot more. Artistes save nations just as athletes, administrators, investors and scientists do: harnessing all potentials strategically is how nations are built. King Sunny Ade would probably be much happier if governments at various levels were to a do a lot more for the Nigerian artist. The legacy objective of the Foundation which he proposes, should be in this direction.

At 70, he is definitely and now incontrovertibly an elder, may he live much longer before he becomes an ancestor, may he also last longer than that his former boss, Fatai Rolling Dollars, and if he so wishes, may God grant him that same strength with which Fatai Rollar Dollars was cracking fire and attracting neighbourbood maidens at close to 90. KSA, sa ma yin won logo…baba omo igboro worldwide, tu-ale (!); may you remain healthy upstairs and downstairs. And may you also continue to produce good music. And as for all the younger artistes wondering what this is all about, I leave you with King Sunny Ade’s comments about how nowadays, “we see more of vulgar lyrics”. He says younger artistes should be more interested in “what the ears will hear and eyes will see in 20 years (and) and they will not be ashamed to regret anything”. I made that same point a few years ago, before I went to Abuja and I was crucified for weeks in a very malicious public debate. Thank you KSA for telling them.