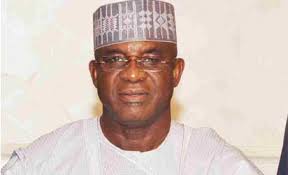 “The enemy has clearly and unequivocally served the nation notice of its vile intentions,”

These were the words of the Nigerian Senate President, Senator David Mark, during the resumption of plenary on Tuesday after a working Easter break.

In his speech Mark pointed out that, “For all Nigerians, this year’s Easter was foreshadowed by sorrow, gloom and anxiety. A few days before Good Friday, there was a bomb blast at Nyanya Motor Park in our nation’s capital at rush hour. The blast left in its wake, death, injury and massive destruction of properties. The anarchists followed up the bombing in Abuja with other acts of infamy in the North East, the most reprehensible being the abduction of secondary school girls in Chibok, Borno State.

“The abducted school girls are yet to be found. Some reports claim they have been sold off to foreigners.Boko Haram says it abhors modernity and has engaged a bloody campaign to ensure the Islamization of northern Nigeria, leaving thousands of casualties in its trail.

Therefore, a clear, unambiguous and decisive military response from the Government, beyond the imposition of a state of emergency, is urgently required in this circumstance.” He lamented.

“Our thoughts and prayers go to all those who are affected by these needless acts of savagery. Our thoughts and prayers also go to their families. We stand united in grief with the families of these hapless school girls in their hour of pain, agony and anxiety. We call on their kidnappers’ to immediately release them unconditionally”

Senate Mark also made a strong case for an urgent military action, beyond the state of emergency in place at the moment, to end the war against Boko Haram, stating that it is clear that Nigeria is at war with Boko Haram and therefore advised the Government to do all it can to immediately identify the sponsors and the source of funds to the terrorists and the insurgents, “ In this connection, nobody who is implicated, no matter how highly placed, should be treated as a sacred cow,” This is an option we must consider now!

In this vein, he reiterated the need for a clear, unambiguous and decisive military response from the Government, which he noted is urgently required to eradicate the menace of insurgency.

“It is obvious that we are dealing with insurgents and well-funded nihilists who are determined to violently trample upon the secularity of the Nigerian State and destroy the country. A modern, vibrant, progressive, multi-ethnic, multi-religious Nigeria is an anathema to them, Because they are fired by zealotry and extremism, they are not likely to be swayed by overtures of any kind. We must henceforth shift from fighting terrorism to fighting insurgency” Mark stated

“The scope of Boko Haram’s assault on the Nigerian State cuts across places of worship, schools, police stations, military facilities, government installations, and defenseless communities. Pupils have been brutally murdered en masse in their dormitories; school girls have been brutalized and kidnapped from their schools; police stations and army barracks have been attacked and incinerated; lives and property have been destroyed and whole communities destroyed by the insurgents.

“Because they are fired by zealotry and extremism, they are not likely to be swayed by overtures of any kind. We must henceforth shift from fighting terrorism to fighting insurgency,” the senate president said. “The full might and strength of our security services must now be deployed to confront this scourge and we expect our security services to rapidly reorient their assets and capabilities so as to overcome this difficult challenge. And this must be done within the shortest possible time frame with minimal casualties.” He appealed

However, Mark noted that the operational structure of Boko Haram is not publicly clear stating that the government appears convinced the insurgents are funded by both foreigners and local politicians with an intent to cripple Nigeria’s political institution.

Mark however, called on communities in the immediate theater of conflict to join in the war against insurgency, noting, “Our emphasis must therefore be on winning the hearts and minds of the communities in the immediate theaters of conflict. The full might and strength of our security services must now be deployed to confront this scourge and we expect our security services to rapidly reorient their assets and capabilities so as to overcome this difficult challenge. And this must be done within the shortest possible time frame with minimal casualties. Let me emphasize that for them to achieve this they require the cooperation of all and sundry.

“On our part as Federal Legislators, we will continue to co-operate and work with all arms of government and the people to bring this unwarranted assault on our peace and unity to a swift end. We will activate and deploy every possible constitutional legislative instrument in aid of the war against terror. Every concerted effort must be made to bring this reign of terror to a decisive end.

“The breadth and scope of this assault on the Nigerian State makes for somber reading; places of worship have been violated; pupils have been brutally murdered en masse in their dormitories; school girls have been brutalized and kidnapped from their schools; police stations and army barracks have been attacked and incinerated; lives and properties have been destroyed and whole communities uprooted and made refugees in their own country.

“The tragedy is that, at a time of grave national emergency like this, when every Nigerian should stand in unity and openly rebuke evil, some of our countrymen and women, unfortunately only see this as an opportunity for partisan politics.

Appallingly, rather than condemn in the strongest possible terms they have resorted to destructive partisan diatribes that can only demoralize our troops, and the nation and encourage the insurgents. When a nation is faced with clear and present danger, what is required is a bipartisan approach and a show of support for the government and the security services.” He said

Mark also lamented the call for a bipartisan government, stating that, “It is dispiriting that at the peak of bombings, abductions and senseless killings by insurgents, rather than stand together as Nigerians, some people are speaking along party lines, scheming and viewing anarchy from the prisms of partisanship. This is condemnable and totally unacceptable. We should not sell the truth to serve the hour. And the truth is that Boko Haram has declared war, not just on the present government, but on any government founded on the principles of democracy, secularity and tolerance!

“I do not by any means seek to discourage debate, nor do I abhor constructive criticisms. But the print and electronic media are daily inundated with criticisms so destructive that at times one is left to wonder whether the insurgents are now the heroes while those fighting them are the villains. The times do not warrant this kind of devious and divisive politicking. The impression must not be given that anybody who gives his life fighting insurgency has died in vain.”

“The time has come for us to stand shoulder to shoulder as we confront this evil. As Nigerians, we must all unite across party lines with the sole aim of fighting and defeating our common enemy. If the enemy of unity, peace and progress prevails, there will be no political parties, except the party of hate, of intolerance, of anarchy, and of backwardness and bigotry and this must never stand. That is not a prospect that I, or any other Nigerian, would wish our dear country.” He decried

On this note, he therefore, called on every Nigerian to be patriotic, patient, prayerful and hopeful, advising that there is no way a strange and anarchic ideology, not supported by any of the faiths to which we subscribe, will overcome the civilized and collective resolve of Nigerians.

“In spite of all these, let me re-emphasize my stand that we should not foreclose the avenue for dialogue as a means of finding a lasting solution to the current acts of terrorism and insurgency.” Mark said