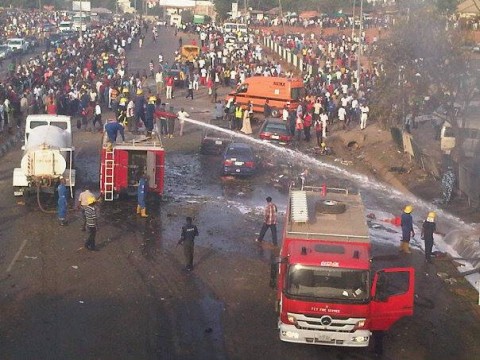 In the light of the ongoing insecurity across Nigeria, the Muslim Rights Concern MURC, a religious group has condemned the spate of violence in past weeks even as it lamented concentration of the security paraphernalia around high-ranking political office holders.

The group, in a statement signed by its Director, Professor Ishaq Akintola, accused security agencies in the engagement of what he described as sheer propaganda in the war against terrorism.

According to Akintola, “Terrorists bombed Nyanya Motor Park on Monday 14th April, 2014 killing scores of innocent people. The next day, about 100 schoolgirls were abducted by insurgents suspected to be Boko Haram fighters. Within the

same week, another sizeable number of students on their way to write the

Akintola lamented that it is disturbing, that the Boko Haram phenomenon is escalating, especially in this month of April, which is the month that the new Army chief promised to put to an end the social cankerworm, adding that above all the atrocities amplified, that the Nigerian project is endangered.

His words: “The spate of bombings and killings also proves that the emergency rule imposed by the Federal Government is not working.

“It beats our imagination that those who can afford to employ private security details are feeding fat on the jamaheer (poor masses) thereby exposing them to great danger.”

“It is nauseating that a tiny cabal monopolizes the insufficient number of policemen and other security agents. This robs the rest of the Nigerian society of adequate policing and the few security agents who are left are overwhelmed by the pressure of work.”

He however urged the Federal Government to enforce the safety recommendation by the United Nation“1 Policeman for 488 civilians. “

According to him, the Nigerian Police Force has about 310,177 officers while the State Security Services SSS has about 33,000 Personnel. These figures reflect numerical deficiency because for Nigeria’s population of about 167 million, Nigerians need at least 577, 608 Policemen. Our Police-civilian population ratio today stands at 1.538

In this vein, Akintola noted that the last nail in the coffin of security concerns in the country was the concentration of security apparatus around top government officials, which he said is our Achilles’s heel, adding that the earlier the Federal Government plugged this yawning lacuna, the better for all concerned

He advised the Federal Government not to extend the emergency rule in North east, stating that it has only succeeded in impoverishing innocent civilians.

“In fact emergency rules are becoming anachronistic around the world. What FG needs to do is to be more proactive. The security agents should focus more on intelligence gathering. More policemen and SSS should be recruited and their welfare should be improved.

“FG must also spend more money on the army and acquire better weapons. More importantly, the excess security men around the capitalist comprador bourgeoisie should be drastically reduced” said Akintola

He also, urged Nigerians to be extra vigilant, noting the fact that security is an all-comers responsibility, he therefore warned that Unattended or abandoned bags inside airports, markets and public buildings, strange faces, suspicious behaviors and so on should be reported to security agencies.