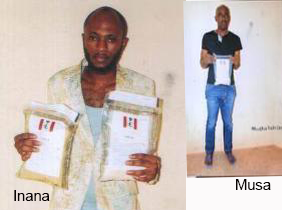 54-year-old Ghanaian comedian,Musah Iddrisu aka Charles Udunehi and a 20-year-old citizen of Congo DRC, Inana Cedrick who claimed to be a secondary school student has been apprehended by operatives of the National Drug Law Enforcement Agency (NDLEA) for being in possession of narcotic drugs.

According to Chairman/Chief Executive of the NDLEA, Ahmadu Giade, the two  suspected drug traffickers were caught during inward and outward screening of Ethiopian airline passengers.

The NDLEA Commander at the Enugu Airport, Nsikak-Abasi Udoh said that Inana Cedrick was caught with 1.500kg of heroin while Musah Iddrisu was found to have ingested 450 grammes of cocaine.

“The Ghanaian comedian ingested 450 grammes of cocaine on his way to Thailand while the student from Congo DRC imported 1.500kg of heroin into the country.”

The Ghanaian comedian, Musah Iddrisu aka Charles Udunehi revealed that he wanted to sell drugs in Thailand.

He said, “I am a Ghanaian and a comedian by profession. I got involved in drug trafficking because of my financial predicament. I bought the drugs in Ghana, ingested it and came to Enugu airport. As a new airport, I felt the security will not be like other airports but I was caught. I regret my action”.

However, upon interrogation, Inana revealed that he was given the drug by a Nigerian woman at Nairobi to deliver to her husband in Enugu.

In his words, “I was given the drug in Nairobi by a Nigerian woman who told me to give the drug to her husband, John Obi Nwadilichukwu who resides in Enugu. I wanted to use the money they promised to pay me in buying beads for sale in Tanzania. I am a secondary school student from a poor home” he stated.

A Nigerian, John Obi Nwadilichukwu have also been apprehended in his bid to receive Inana Cedrick, collect the drug and pay him for smuggling the drug.

Chairman/Chief Executive of the NDLEA, Ahmadu Giade said that adequate security efforts have been made to apprehend drug traffickers at the Enugu International Airport.

“We have already deployed our officials to the Enugu airport before it commenced international flights. Adequate security measures have been put in place to apprehend drug traffickers at the airport” Giade stated.