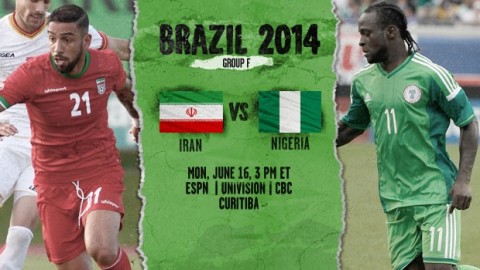 It’s the D-Day! The D-Day for the Super Eagles of Nigeria.

The Day the whole of Africa is waiting for is here. The Day the African Champions must face the ‘’unknown’’  as there’s no hiding place inside the Arena da Baixada, Curitiba, venue of Monday’s group F encounter against Iran.

Super Eagles coach Stphen Keshi admitted that “we don’t know Iran very well.” But at the most glamorous sporting event in the world, who cares whether you know your opponents or not? What viewers across the globe want to see is the stuff you are made off, especially as the reigning champions of a continent. 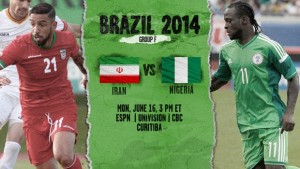 Keshi’s comment may have had the Iranians rubbing their hands gleefully, but hey! the Super Eagles are certainly no cowards. A side no one gave a chance, at the 2013 African Nations Cup-we saw the result. A youthful side mixed with experience and exposure. A more united and technically disciplined side.

The above are some of the attributes of the current Super Eagles of Nigeria without exaggerating.

Keshi’s comment may be the instrument the team needs to move in the direction of their purpose, as fear and anxiety many times indicate movement in a positive direction.

Keshi, a former captain of Nigeria, also lamented the African teams’ “lack of tactical discipline and concentration.”How true and honest from the horse’s mouth!

And talking about technical discipline, every follower of the Nigeria national soccer team will agree that, at least, to some extent, the Super Eagles have injected some sort of purpose into their game, unlike how it was after the 1998 World Cup.

The team may not be what Nigerians want yet, but there’s always a starting point, and in this case, the starting point was the African Nations Cup in South Africa, where against all odds, the Stephen Keshi tutored boys won the trophy for the third time in the history of Nigeria.

Back to Nigeria-Iran. Neither side has enjoyed much World Cup success.

After beating Bulgaria 1-0 in their second group game in 1998, the Super Eagles have had two draws and six defeats.

And Iran’s 2-1 victory over the United States in Lyon 16 years ago was their sole win at a World Cup.

It’s been 16 years since either Iran or Nigeria won a game in the World Cup, despite featuring in three tournaments each since 1998.

However, history does not play football anymore, if it does, world champions Spain would probably be sitting comfortably on top of their group after their game against the Netherlands. The rest is now history.

Iran are the top-ranked side in Asia with an impressive defensive record and a manager with plenty of tactical acumen in former Manchester United assistant and Real Madrid coach Carlos Queiroz.

The African Champions did not look the best in World Cup qualifying or warm-up friendlies, but it will be misleading to judge the Super Eagles based on those performances. The team surely looked like a bunch of players, who could raise their game when the chips are down.

At the Confederations Cup in Brazil, and against current World Champions, Spain, Nigeria did not draw nor win, but fans had a lot to talk about and look forward to in the team.

Therefore, in, Curitiba Monday, Nigeria certainly have lots of talents, and could force Iran to attempt to play soccer if they can score early.

Victor Moses had a bad season at Liverpool, but he looked the most dangerous among the lads during the their warm-up matches, always bringing life to the game each time he had the ball, while his forward mates Ahmed Musa and Emmanuel Emenike are in solid form, based on individual performances for their respective clubs last season.

Vincent Enyeama, no doubt, is the best thing that has happened to the Super Eagles in recent times, so, there’s little or nothing to worry about between the goal post, at least, against Iran.

With victory against Iran, who knows, Nigeria may book a place in the second round behind group favourites, Argentina, who despite not being at their best, managed a slim 2-1 victory against Bosnia and Herzegovina on Sunday.