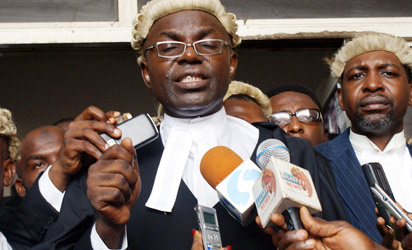 Rights activist, Bamidele Aturu has called for mass action against terrorism in the aftermath of Monday’s bombing of the Nyanya Motor Park, Abuja, Nigeria which left over 72 people dead.

Aturu, in a statement said the dastardly bombing and murder of Nigerians in the early hours of Monday by terrorists had proved conclusively that the security agencies had no idea as to how to confront terrorism.

He said in spite of repeated assurances from government and the top hierarchy of the security agencies, it is dawning by the day that Nigerians were the most insecure people on earth.

“While the gruesome murder of people who have no hand in the current political and economic woes of this country must be condemned unreservedly, and we cannot have words harsh enough for the cowardly killing of defenceless persons, the truth remains that governments at all levels must be held squarely responsible for the state of penury and insecurity in Nigeria.

“Our hearts again go to the victims and families of the victims for the avoidable loss of lives, limbs and properties. Government must pay reparation to all the victims as it was its failure to provide security that led to the unfortunate incident,” he stated.

Aturu said the labour movement and its allies must now consider a mass nationwide protest to indicate revulsion at the unbelievable incompetence of government and security and agencies in handling issues of security in this country.

“It is not only when government takes irresponsible economic decisions that we should do protest. These ceaseless killings require mass protest and I will be willing to participate in organizing it. Enough is enough,” he stated.