Lagos State Governor, Mr. Babatunde Fashola on Thursday says he has ordered tight security at motor parks in the state in view of the Nyanya Motor Park bombing in Abuja, Nigeria which left about 75 people dead and many wounded. 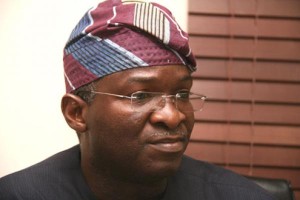 The governor stated that government would not allow any loose end to allow insurgents to strike in Lagos as security of lives and properties were paramount to the government.

Speaking while handing over the Ado Kekere, Langbasa, Kajola network of roads in Eti- Osa Local Government Area, Fashola said he has already held a meeting with all leaders of the unions and motor parks in the state and security would be heightened at the motor parks.

According to him, all residents of the State must be vigilant, tolerant of one another and live in peaceful co-existence, adding that these are difficult times.

“Such periods do not last as every community goes through some challenges at one time or the other, government is doing everything to keep the people, the city and the communities safe. Our catch word should be: if you see anything unusual, say something about it.

“So what we are going to do is that for everybody who is travelling, you have to be vigilant, if you get to a park, take a look at the person sitting next to you. Look at him or her again. We have to be aware now, we can’t pretend anymore. If you see anyone dropping a bag, call him to come and carry his bag. If you see anything unusual, say something,” he said.

He was of the view that the current challenges could be collectively overcome, saying that “the country is going through some tough times but we are tough people. Tough times don’t last but only tough people do, so we have to be sensible about it, be vigilant and we have to love ourselves.”

Fashola emphasized the need for religious tolerance, imploring the people to ignore all those preaching issues of religion because what should be of utmost importance now is the people’s security and prosperity which would enable them have money to send their children to school and to feed.

“Leadership is not about how people worship, did you elect leaders to go and be praying? You elected them to do this kind of work, to give you electricity, to give you roads and to secure you,” he stated.

“At the end of the day we have never disagreed over meat, there is no Christian water and no Muslim water; we all drink the same water. Even if the traditionalists give you Naira would you reject it? If you go into the money that is used to build a mosque, you would find Christian money in it and if you make findings about money used in building a Church, you would also find Muslim money there,” he added.