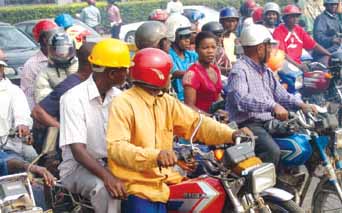 (AFRICAN EXAMINER) – Following the massive restriction on the operations Okada riders and tricycle operators by the Lagos State Government, the Ogun State government has declared that its doors are not open to the displaced fleet workers.

Special Adviser on Public Communications to Governor Dapo Abiodun, Remmy Hazzan, made the declaration in a statement issued Wednesday in Abeokuta, the Ogun State capital.

Specifically, the announcement was a reaction to statement credited to the Chairman Caretaker Committee on Transportation in the State,  Femi Adeniyi, who Monday reportedly assured the motorcyclists that left Lagos for the state of adequate accommodation.

Mr. Hazzan said the Ogun State did not have the capacity to cope with the menace and security challenge the influx of the Okada operators from Lagos and any other neighbouring state would pose.

He noted that Okada operation is linked to many challenges, including security, which is the reason why their operations have either been totally banned or restricted in many parts of the country.

The government official said deploying motorcycles for commercial operation is not in the schedule of the National Transportation policy, adding that the Ogun State government is already looking into the issue with a view to coming out with a clear policy direction.

Mr Hazzan noted although its doors are open, only to genuine businessmen and foreign investors to take advantage of the proximity of the Gateway State to the nation’s commercial and biggest market.

Governor Babajide Sanwo-Olu last Saturday announced the restriction of Okada and tricycle operations on some State roads, in 15 Local Council areas of the State.

The State Government has subsequently launched some fleet buses to ferry commuters to their various destinations in the metropolis.

However, many residents have criticized the policy, saying that it has added to the hardship of people and likely to scale up the level of crime in the city.