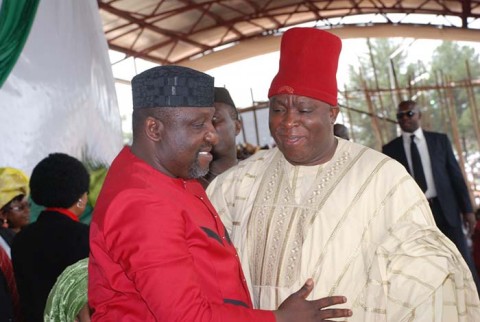 Governor Rochas Okorocha, of Imo state, on Saturday hailed last week’s removal of the National chairman of All Progressive Grand Alliance APGA, chief Victor Umeh, by an Abuja federal High court, describing the development as a divine blessing to the party. 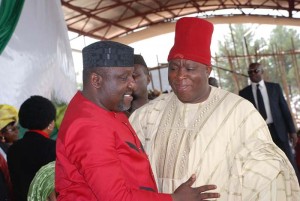 Governor Okorocha (left) and Chief Umeh when the going was good.

African Examiner reports that Okorocha, who was elected Governor on the APGA platform, left the party last year for the opposition All Progressive Congress APC, and was recently made chairman, progressive Governors forum.

Reacting to the sack of Umeh, by the court, the Governor, said it was a justification of the divine mandate given to him by the people of the state in the 2011 governorship election.

Okorocha, who spoke during a reception organized for him by APC party supporters and loyalists upon his return from the United States of America in Owerri, said nothing could be more rewarding than the sack of the embattled chairman, noting that the sack coincided with his purported recall from the party.

Hear him: “You will recall that few days ago, APGA threatened to go to court to recover their mandate from me and suddenly their Chairman was sacked. How best can you describe my mandate?  for me, that is democracy in action,” he declared excitedly.

On the outcome of the meeting of the All Progressives Congress (APC) held during his one day stop over at Abuja, the chairman of the APC Governors Forum disclosed that the National Executive of the party deliberated on the forthcoming elections in Ekiti and Osun states.

He however, assured that APC at the national level was doing everything humanly possible to avert what he described as sham that took place in Anambra state last year in the name of governorship election.