OPINION: Resignation as an African Abomination 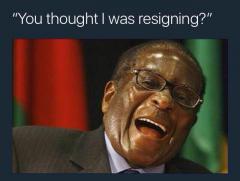 (AFRICAN EXAMINER) – “African leaders do not resign, that’s cowardice and the fact that UK Prime Minister-David Cameron has just resigned confirms everything I have said about him—he is weak and a coward.” President (now Ex) Robert Mugabe of Zimbabwe in 2016.

The recent confusion about what is happening in Zimbabwe, with President Robert Mugabe refusing to resign, (now he has finally resigned, 21 November 2017) even when pressured and being pampered has again brought to the fore the obstinacy that exists in Africa when it comes to resigning or relinquishing power voluntarily.

In Mugabe’s case, as a friend from Kenya wrote to me, the Zimbabwean Defence Forces are merely exercising “soft power” – getting others to want the outcomes you want – and co-opting people rather than coercing them. This can be contrasted with “hard power”, which is the use of force and coercion. In other words, the Zimbabweans are being very civilised about removing Mr Mugabe, even after 37 years of holding absolute power.

In our modern history, after most African countries became independent from their several colonial masters, very few African leaders relinquished power voluntarily. In most cases, they are forcibly removed, and in some cases, their ends were not pretty. Did they need to go through the shame, or put their family and even people through such terrible and uncertain times? In some cases, the whole country is plunged into civil strife, instability, poverty, and misery.

African and Nigeria’s top political leaders and their cohorts in the civil service don’t resign as a way of assuming political or civic responsibility for problems in their portfolios. They very rarely account publicly for their responsibilities, or own up when problems arise. Instead, the usual trend is to sit tight and wait to be forcibly pushed out or, if they are lucky, die in office.

Equally rare are resignations of senior people associated with, or in government. Even public pressure fails to force them to resign. In other words, they do not take public culpability for their actions or in most cases, inactions.

Have you ever wondered why public officers (appointed or elected), officials, civil servants, and politicians never offer to resign or step aside while investigations go on when they are accused of wrongdoing and corruption issues?

I did a bit of research and thinking, and these are the reasons that popped out:

It is indeed difficult for the African public official to resign from an office or position or to relinquish power when he’s a leader. In a way, I have some pity and understanding for them; they are products of the society that begets them, so it is difficult to depart from the norm and genetic trait.. Now you know the reason our political emancipation, socio-economic and human developments have always been in jeopardy.

The good news however, is that this phenomenon, a typical African trait, is changing. Leaders and public officials are finding it increasingly difficult to hide, and to sweep thing under the carpet. The people are becoming more aware of issues of governance, development, and service delivery, and the misdemeanours, corruption, and other malfeasances (conduct by a public official that cannot be legally justified or that conflicts with the law) of political leaders, public officials and civil servants are increasingly being exposed. It is not business as usual.

They must be made accountable and responsible for their actions, or inactions. They must be made to know the “seats of power or authority” that they occupy is not divine; not their birth right and is only temporary. Power is transient; it does not belong to any one person. And power, when you have it, must not be abused and is to be used justly and fairly for the benefit of the weak.

Let’s keep applying pressure, all kinds of pressure, on our leaders and public servants. Let them know and feel the power of the people, by whose grace they got into power, instead of them alluding to God for letting them get into power.