OPINION: What The National Stadium Told Me 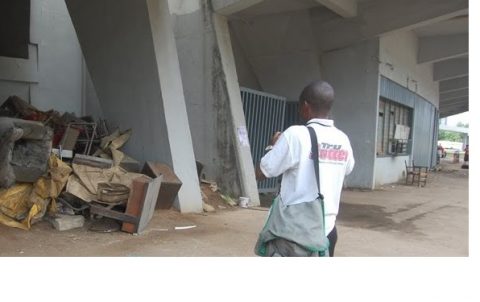 (AFRICAN EXAMINER) – That was a few days ago, I was invited to a religious programme at the National Stadium. When queried about the appropriateness of using a sporting facility for a religious function, my friend promptly told me that considering the number of worshippers expected, the national stadium remains the most suitable for the exercise. With this explanation given, I have no reason to probe further

So, capped with my prayer intentions, I arrived the National Stadium in Surulere, Lagos that faithful morning for this all-important religious exercise. I had no time looking at the environment as I was slightly running late for the programme. So I made straight to the entrance gate leading to the main bowl. At this point, I had no premonition that something was amiss apart from observing the dusty and abandoned looking gate that heralded us into the main bowl of the ‘national monument.’

Setting my eyes at the main bowl pitch, my inner self-left my body, my fire-fire prayer and mood all turned contemplative at the sight of the unkempt place. From there, my confines descended into a feeling of desolation, and I became speechless for a moment and my inner self without my consent muted, what a nation.

As if that was the comment the stadium was waiting for, ‘he’ immediately responded to my inner self, saying; this is what I have been going through. Going further, the stadium narrated to me his sorry story of abandonment by his successive parents and guardians.  How he has suddenly become cheerless, how the paint on his body has faded out, how the pitch has become grassless or patches, dotted with potholes and garnished with undulations.

The stadium further painted a picture of how the rodents and reptiles are now the caretakers as well as the tenants of this one-time magnificent edifice. He further expressed his profound gratitude to the religious groups that now periodically comes to know how he is faring as part of their corporal work of mercy.

There he was, silently bemoaning his fate lamented that he would never have believed that his parents would abandon him to this level of misery and decay. He, however, explained that he is not holding it against anybody while adding that I should convey his best wishes to his brothers and sisters whom he listed as – Hospitals, Economy, Schools, Industries and Infrastructures.

That was when I realized the family he comes from. But as a Christian, I started by encouraging him to ‘weep not child’ for he is not worse-off when compared with his brothers and sisters. I explained to him that his eldest brother, Hospital by name is actually in the hospital as we speak.

I informed him that his elder sister called Education has been in the coma for years. I further pointed out to him that the younger brother called industry, is in comatose while his immediate younger brother, Electricity was recently discharged from the accident and the emergency Ward of one of our nation’s teaching hospitals and I now see him indulge in walk therapy on my street once in two days while his twin brother Infrastructure, was declared missing over 16 years ago.

Again, I did point out to him that their mother is now pushing for divorce, separation or restructuring of the family setting. A development occasioned by your father’s high propensity to marginalize. But the most worrying part of this narrative ,I explained is that their ‘last born, Naijade alias Crude Oil, whom God blessed with multiple talents thereby making him the breadwinner of the family is threatening to possess his possessions and possibly pull down the house on all.

He is accusing your father of not doing anything to better their living condition despite all the ‘’chop money’’ he has been contributing. After listening to my litany of challenges facing his family, he queried but rhetorically, ‘Where do I go from here?

Leaving the environment called the national stadium, just by the exit gate. I was again confronted by the statue of the late Sam Okwaraji screaming, Sir, come and listen to his basket full of stories. I immediately replied, no, I have heard enough. He fired back, ok I can summarize it using one sentence. With that addition, I pleaded, please make it snappy. And in a very hush voice but succulently said, please tell Daddy that the onetime ‘Good Boy’ is still waiting.

At the end, I had all my personal petitions granted but still went home sad. Why? Simply because the condition I saw our national monument portrays us as a nation lacking in disciplined actions and culture.

Significantly also, my visit to the stadium on that day has provided an answer to my age long believe that our leaders do not have the intention of developing sports at heart. Again, from the sorry state of our sporting facilities, it will take our leaders the strength of a bulldozer to convince our youths that they have their interest at heart.

I say this ‘with malice to none but with charity to all’. Looking at the national stadium as I saw it, one may be forced to ask if we have ever had a ministry of youths and sports development in this country.

The stadium remains a metaphor for a nation that is lacking in maintenance culture and visible level of neglects which cuts across the board; education, health, infrastructures and so on.

In all, this national monument in desolation speaks volume of what is going on in the other sectors even as we have forgotten completely that we cannot achieve the hypermodern transformation currently preached the world over with this form of laid-back leadership style.

For us, as a nation to achieve greatness, we must be holistic in approach. We must recognize that ‘the end is never cut off from means because the means represent the ideals in the making and the end of the process.

From the foregoing, what we urgently need to begin with is the act of restructuring, not our resources but that of our minds and the right time to start this shift in paradigm is now. Otherwise, we shall continue as a people to achieve the same result and chances are that we may bequeath this inactivity to our youths.