OPINION: Who Would be President Buhari’s Next Guests in London 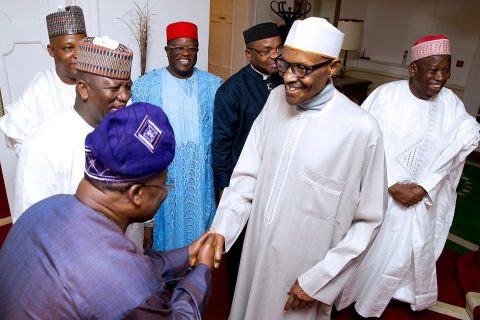 (AFRICAN EXAMINER) – President Buhari of Nigeria is publicly known to be in London on a medical vacation. This status pleases Nigerians than their ability to accept  that Nigeria has no medical facilities to look after even its president. The road system is broken down almost completely and so are others systems. Nothing seems to be working and everything rolled into the basket of  corruption as a scapegoat. So the President, a reformer crusader, has no choice but to take his illness to London on a medical vacation. This is a paradox. Nigeria should be ashamed of herself and swallowing it’s pride, especially the politicians and everyone that had played a leadership role in the nation hitherto.

For the time it has lasted only the radio station  of the Ekiti State Governor, Mr Ayodele Fayose has said any news concerning the president.  We were all in the dark and in the school of speculations rumours. At one time Governor Fayose’s Radio Station said that the First Lady, Mrs Aisha Buhari, had hurried to London  because, her husband, President Muhammadu Buhari’s health had deteriorated, and in fact was on a life-support. The Ekiti newscaster was so sure and definite. The news from that Ekiti Radio was contrary to the news given later by the Acting President Prof Osinbajo when he claimed that his boss was responding to treatment, recovering fast and in a great spirit. The public was thereby ladened with two options; to choose between Ekiti Radio Station or Aso Rock of Osinbajo news broadcast. If it is proved that Ekiti Radio Station of Fayose had been feeding the public with fake news, made-up stuffs, etc, this may affect what he is standing for. He is in the opposition but where only credible facts could help him, his cohorts and his party; they needed to be seen as to correct and counter government news.

These contrary views may have necessitated the serial teams that are now taking turns to visit Buhari in London. Our first opinion is to stop any further visitors on tax payers money. They should resolve the situation that didn’t make it possible for their president to have necessary medical attention in Nigeria. They should fix our roads, water system, electricity, education system, medical system, pay salaries of their workers, etc.

Is it possible to trace every shortcoming to the ghost called corruption? Can’t we see incompetency, lack of institutions to hold people accountable? Can’t we see ignorance and outright stealing rather than mere corruption? We have to emphasise this because even the government of Buhari is still too naive and simplistic about the whole episode. For example he didn’t know that the fight, against corruption, or restoration of the society, building sustainable institutions, and others, is interrelated and involving all arms of government. Hence he needed a national assembly of his own type as well as a judiciary of same clime instead of claiming not belonging or taking success for granted. Politics is dirty and to succeed politicians have to play it dirty first otherwise hijackers wouldn’t allow any institution to grow. Their interest to continue ti steal is also always on the line as their first priority and they too need to fight and keep their stealing culture. It is not that “corruption fighting corruption” but that a system that will fight corruption has to be robust enough. Nigeria has not been lucky to develop to the level of building robust systems. What is allegedly prevailing is that corrupt officials are in every institution, taking decisions on behalf of government, and making laws that have no practical values.

By this act democracy has suffered it’s worst blow here in Nigeria and what is left of it can’t be called democracy anymore. Hijackers and cabalism, helped by raw material cash and sometimes arms,  have taken over the weak central government. Their daily business is staying around any coming government to milk. They have no other factories. Government civil servants, police and the armed forces, and recycling politicians are only agents. On the surface we wrongly call it corruption.

Hence those lining up to make yet other trips to London are further burdens. The president himself can help by telling Nigerians whether or not he is fit enough to continue to lead a nation that needs, not only a healthy president at this time but a radical and rootless one that can lead the nation out of the woods of corruption and darkness. President Buhari is probably well enough but Nigeria is very sick and this time. The object and focus is not who does the good job but who can do the job. Over the years Buhari has laid some great moral foundation for himself and from here religion, ego or ethnicity is no longer a source of his strength but they are weaknesses for him in disguise. Whereas within him, even on a sick bed, is the invincible  strength and the inner power that is free to shine and break the shackles and chains holding Nigeria down. But he would need the encouragement to release that power at last.

Therefore it may seem that we are going out of our ways when we discourage more visitors to London. The truth is that those visitors are incapable to tell the president the truth. Rather we suspect instead that their visit is to make personal assessment of the ailing President using their own personal ambitions as parameters. They may be there to tell him about what they themselves won’t do, or telling him how much Nigeria is missing him, and forgetting that their host needs himself and his privacy, and they lack the ability to tell him that his children and family need him more, and they are there only judging the ailing President by a standard that our lawmakers and judges don’t follow.