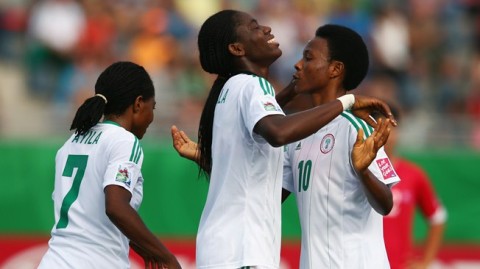 Asisat Oshoala was on fire, scoring four times as Nigeria made another history after hammering Korea DPR 6-2 in the highest-scoring semi-final ever seen at the FIFA U-20 Women’s World Cup.

Courtney Dike continued Nigeria’s habit of scoring early goals at the tournament, when the USA based forward hit the back of the net a little after one minute into the encounter. 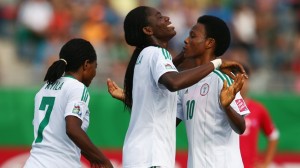 Oshoala doubled Nigeria’s lead in the 24th minute after capitalising on a poor touch from centre-half Song Kyong-Hui before rounding the keeper and passing into an open goal.

Oshoala also laid on two more goals in a win that leaves the Super Falconets to face Germany on Sunday at Montreal’s Olympic Stadium, and the North Koreans to play for third place at the same venue.

Scores remained 2-1 at half-time before Nigeria swiftly put the game out of reach within minutes of the restart.

In similar fashion to her appearance and goal in the quarter-finals against New Zealand, Uchechi Sunday came on as a substitute and within a minute scored to restore her team’s two-goal lead.

Oshoala then put the game out of reach on the hour mark when she hit a stunning shot from 20 yards out that left Kim with no chance as it flew into the top corner.

Korea DPR had one last glimmer of hope two minutes later when Ugo Njoku handled the ball in her own area, allowing Jon So-Yon to score from the penalty spot.

However, Oshoala’s quality shone through yet again in the 68th minute when she completed her hat-trick, while netting the fourth with five minutes to the end of the game.

In the second semi-final, Germany secured a 2-1 win over an excellent France side in Montreal.

The outcome was harsh on a Bleuettes team that dominated much of the excellent, enthralling last-four encounter, but were ultimately punished for failing to convert a string of superb chances.

Many had predicted that this would be the most open, evenly contested and exciting match yet at Canada 2014, and it lived up to its billing, with both sides committed to attack.